Just east of the Surrey and Langley border, Campbell Valley Park is a 535 hectare green space with kilometers of trails for walkers, hikers, cyclists, and those on horseback. With its open meadow, bubbling Little Campbell River, and leafy marshland, it’s the perfect destination for late summer — and it’s today’s Metro Vancouver Park Series profile. 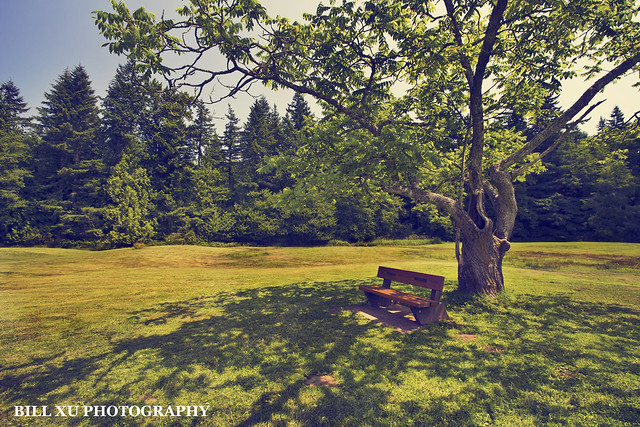 How to Get There
Take Highway 1 east to Langley’s 200th street exit and head south for 14.5km. Turn east on 16th avenue for the North Valley entrance. From Highway 99, take the 8th Ave exit east for 7.5km and follow signs to make your way into the park. You’ll pass 176th (where you would turn to go to the border) and the Campbell Valley Store, which is a sure sign that you’re in the right area — but just keep going a bit further.

Features
There is a visitor centre and wildlife garden, reservable picnic area (with washrooms), and areas for dogs to roam both on and off leash. Popular trails include the Little River Trail, which is a manageable 2.2km long, the Ravine Trail, and the 14.4km-long Shaggy Mane Trail. You can walk under a crumbling forest canopy in the fall, along a boardwalk network, or stretch your legs in the meadow. Spot squirrels, beavers, birds, and other critters during your adventure in the park. 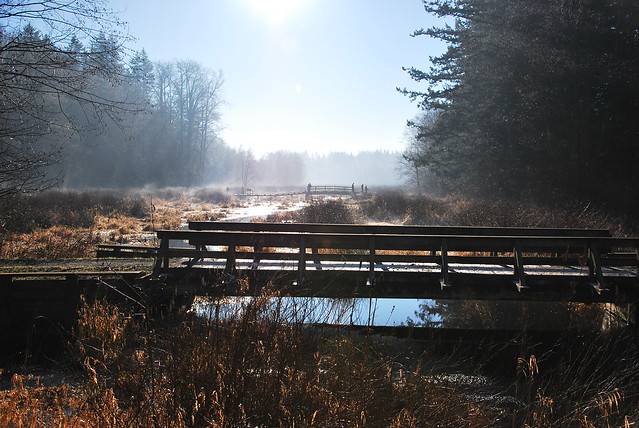 History
There are a few historic buildings in the park, accessible off 204th street: The Annand/Rowlatt Farmstead and the Lochiel Schoolhouse.

The farmhouse, built in 1888, is one of the oldest houses still extant in the Township of Langley. Both the Annand and the Rowlatt families were important pioneer families in the south Langley community. The first family to farm this site was Alexander Annand and his wife Sarah Ann, who homesteaded here in 1886. The Annands are credited with establishing the Langley Fall Fair in the 1910s. They sold the land to W.F. Taylor in 1905, who leased a portion of the farmstead and the house to Len Rowlatt in 1914. Rowlatt, renowned for his water divining ability, later purchased the house and farm and lived there until his death in 1972. [Historic Places] 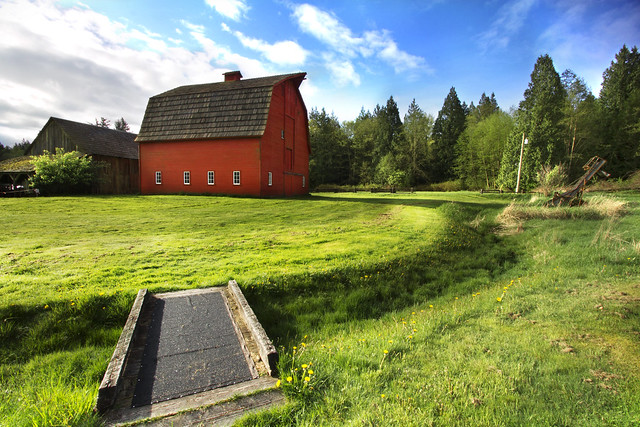 Originally established in 1889, Lochiel School was one of the earliest schools formed in the new province of British Columbia. This later version of the school has a history of use and disuse (1925, 1986) and in being moved about to other sites (1950, 1975, mid-1980s). Built in 1924 to replace the first neighbourhood school house, Lochiel School is important because of its historic and educational significance and because it is one of two surviving examples of its type in Langley.[Historic Places]

We used to visit this park often when I was little and we always attended the Campbell Valley Fair (with hay rides, crafts, kite-making, and kettle corn treats). Now in its 34th year the Country Celebration at Campbell Valley Park is happening September 15th and 16th from 10:00am to 4:00pm. I highly recommend familiarizing yourself with this park at this event if you are not already. The event is $10 per family (children 6 and younger are free) and will feature performers, a ferris wheel and a llama obstacle course. Park off 204th to get to the Country Celebration which will be around the farmstead.