Rounding the Stanley Park Sea Wall the photo opportunities are abundant. North Shore and city scenes, forest trails, ocean wildlife, balanced rocks on boulders, sunsets, and more. Perched on the Western tip of the peninsula, Siwash Rock might just be one of the most photographed hunks of stone in the City and as such, it’s today’s Vancouver Icon. About 32 million years ago, a volcanic dike formed in the sedimentary rock that forms the foundation of the park (sandstone and mudstone). Magma was forced to the surface through a fissure in the Earth’s crust creating the basalt stack, which is more resistant to erosion that the softer sandstone cliffs. Siwash Rock is the only such sea stack in the Vancouver area. [Source: Wilderness on the Doorstep: Discovering Nature in Stanley Park] 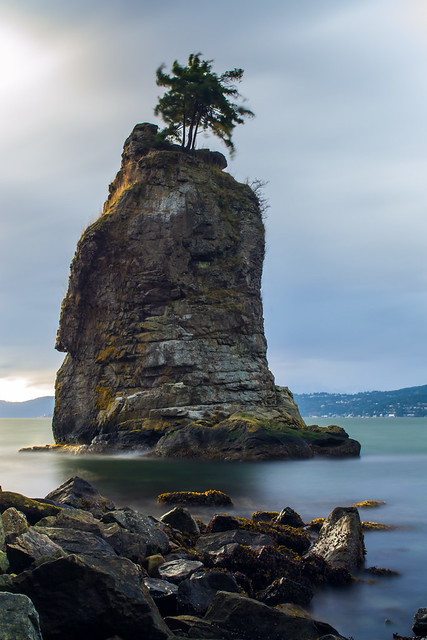 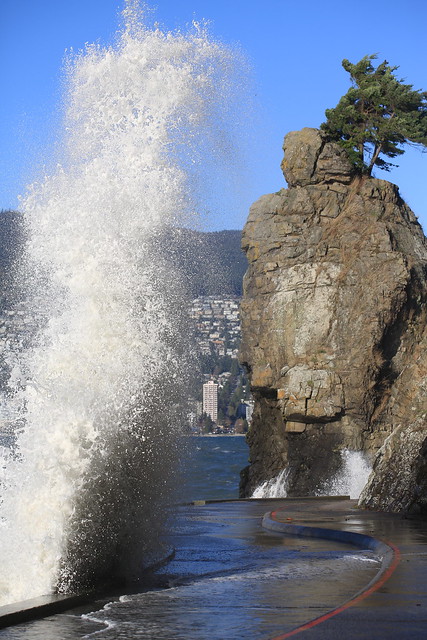 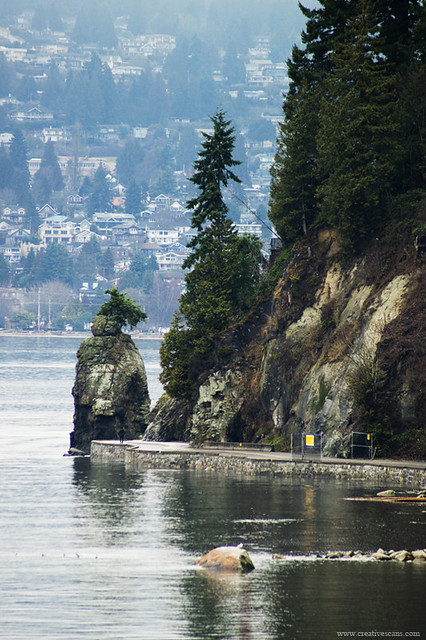 To the Squamish First Nation Siwash Roch is Skalsh or Slah-kay-ulsh. According to E. Pauline Johnson’s “Legends of Vancouver” it is a young man who was turned to stone, as an honor. Its plaque reads: “Indian legends tells us that this 50 foot high pinnacle of rock stands as an imperishable monument to “Skalsh the Unselfish,” who was turned into stone by “Q’uas The Transformer” as a reward for his unselfishness. ” From far trans-Pacific ports, from the frozen North, from the lands of the Southern Gross, they pass and repass the living rock that was there before their hulls were shaped, that will be there when their very names are forgotten, when their crews and their captains have taken their long last voyage, when their merchandise has rotted, and their owners are known no more. But the tall, grey column of stone will still be there – a monument to one man’s fidelity to a generation yet unborn – and will endure from everlasting to everlasting.” [Source: Legend of Siwash Rock] 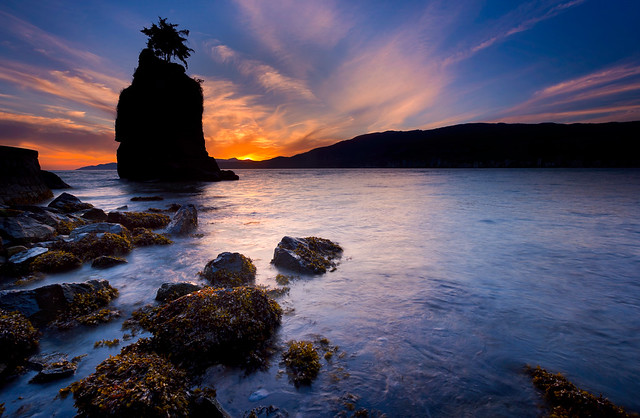 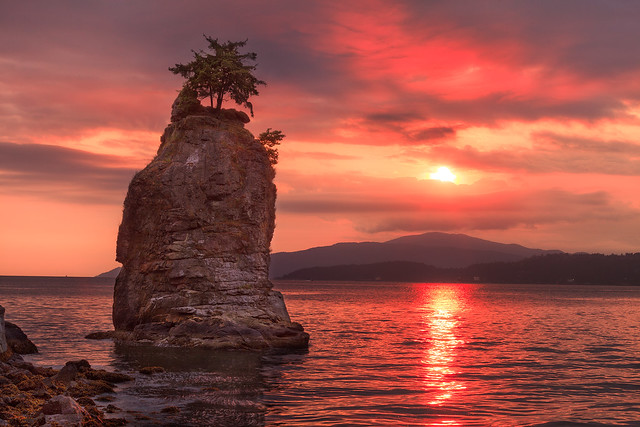 Other Vancouver Icons posts include: Kitsilano Pool, White Rock Pier, Main Post Office, Planetarium Building, Lord Stanley Statue, Vancouver Library Central Branch, Victory Square, Digital Orca, The Crab Sculpture, Girl in Wetsuit, The Sun Tower, The Hotel Vancouver, The Gassy Jack Statue, The Marine Building, and The Angel of Victory. Should you have a suggestion for the Vancouver Icons series please feel free to leave a note in the comments. It should be a thing, statue, or place that is very visible and recognizable to the public.

Share
Tweet8
Share3
Pin5
Email
Reddit
WhatsApp
16 Shares
Current Contests on Miss604
*All contests are open to residents of Canada only, unless otherwise stated. Contest timelines are published on each individual post along with entry methods. Some contests may only be open to those 19 years of age and older. Winners are announced on the contest blog posts. Contest policy »
Comments are closed on this post
Advertisement