Over the last few years I have featured many of gigapixel images captured and processed by Ronnie Miranda of Active Computer Services — from a panoramic view of Vancouver at dusk to a timelapse and even a billion pixel image of the first BC Lions game at BC Place last year.

These images can be taken by anyone with a digital SLR camera and the GigaPan EPIC instrument that Ronnie’s company (based locally) has developed. John Biehler even got his hands on one and captured amazing photos of downtown from North Vancouver and the PoCo Trail. Last year Ronnie used GigaTag for tagging the Game 7 crowd on Georgia street and also the Whitecaps first MLS game at Empire. GigaTag is now being used by SI (Sports Illustrated) for the Olympics. Existing platforms like GigaTag are Flash-based and each one has its own limitations. Therefore, these don’t work on the iPad and Flash will no longer be supported on Android devices beyond Android 4.0.x. However today, GPXtag was launched. It’s the new social media tagging platform for gigapixel images. GPXtag has all the features of all existing tagging platforms combined… and more:

To celebrate the launch of this new technology, developed in BC, Ronnie has offered up a prize pack for one lucky reader. This includes a GigaPan EPIC Pro (value $895) and a GigaPan Backpack ($119). 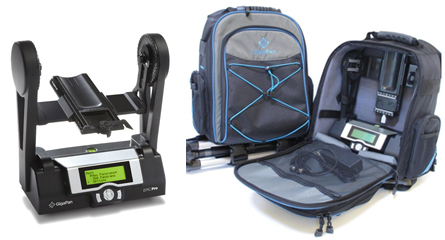 It does not include a camera but will compliment almost any digital SLR camera setup you have already. Ronnie has made this contest international as well so anyone can enter and he’ll ship the prize anywhere in the world.

Update The winner is Stefan!