It’s time for students of all ages to return to school to begin another year of academic growth. I always enjoyed back to school shopping even though it meant we were that much closer to returning to class. Highlighters, binders, duo-tangs, pencil crayons, Trapper Keepers and geometry kits (always a new geometry kit even though kits from previous years were barely used). Fall also means snuggling up with a blanket and a good book while multicoloured leaves float to the ground outside your window. 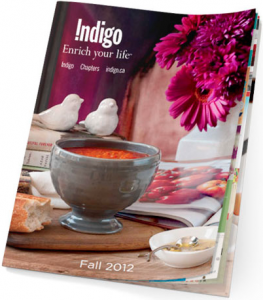 Chapters Indigo recently released their Fall Gift Guide that includes Notable Books for Fall like Neil Young’s Waging Heavy Peace, and J.K. Rowling’s Casual Vacancy. For business-minded readers they have a Dragons’ Den Collection, and for the home chef there’s a collection of farm-to-table and comfort food reads like A Country Cook’s Kitchen and The Best Soups in the World.

They have also stocked up on lifestyle items, games, home accessories, journals, and everything that compliments a good book in your home. Tea pots, throw pillows, candles, headphones, radios, party supplies and gadgets. These items are available at Chapters Indigo locations throughout Canada (including Robson/Howe, and Broadway/Granville) and online.

RT to enter to win a @ChaptersIndigo prize pack from @Miss604 http://ow.ly/dkuld

Follow Chapters Indigo on Twitter and Facebook for deals, specials, and product information. I will draw one winner at random from all entries next Wednesday, September 5, 2012 at 12:00pm.

Update The winner is Maureen!