It’s not always easy to be in a professional partnership with your significant other but it’s a venture that Danielle and Drew McTaggart have taken on with a smile and sky-high ambition.

I met up with the pop-rock duo from the band Dear Rouge this morning to talk about how they’ve been selected a Top 20 finalists in this year’s Peak Performance Project. As I walked back from the coffee shop I didn’t just have a notebook full of interview questions that were answered. I carried a custom-made burned mix CD, a smile on my face, and an anticipation to see the couple again this summer. 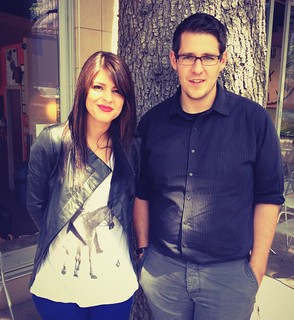 Drew said that Danielle is really good with people and he likes the planning, logistics, and the behind-the-scenes process. “You assume your roles when you’re a couple, based on strengths and weaknesses… …I love music but I’m not as gifted a performer as [Danielle].” Danielle admitted that she likes being the centre of attention: “I love entertaining people and helping them have fun.”

Danielle and Drew were individual artists and it wasn’t until just over a year ago that the couple got married but also combined their creative efforts. Forming Dear Rouge, they have put all they have into making a go at a career in music together.

Drew explained that they’ve been in the industry for a while but Dear Rouge itself is still in its infancy. “We’ve done music our whole lives separately and that’s kind of how we met. We had all of these separate music things — we’ve done tours we’ve played shows but when you start a new band with a new name you don’t have anything to show for it. We just needed to kind of let people know we’re not just starting and we’ve been around for a bit.”

With the help of their friend Sam and the Peak Performance submission due date, they focused their eyes on the prize. “We were in this pre-phase. We got married last year, we had the tracks there but we didn’t have the website and everything we needed to setup to just kind of launch,” Drew said. “So, the deadline for Peak Performance project was coming up and we were like ‘Ok, let’s go’. We filmed our live acoustic performance… … we got that done, tried to get followers on Twitter, got all our friends on Facebook, all of that.”

They’re now ready to take on the process that comes with the Peak Performance Project — shows, development, and bootcamp. “It was pretty crazy when I found out that we were on there,” Danielle said with a laugh. “I was driving and I pulled over and was screaming by myself — we were the first ones called.”

The first song I heard from Dear Rouge was You Step of Out Nowhere which has a YouTube video posted on their website. This sweet tune was written by Danielle for Drew and you won’t believe how she keeps her composure as the video takes her up and around the old wooden roller coaster at Playland.

I think the You Step of Out Nowhere video is a great introduction to the band. You immediately get a sense of sweetness and care, with smiles turning to laughter.

Other tracks from their Heads Up! Watch Out! EP include the energetic title track and Diamonds, which makes me want to be out on a road-trip with John, driving down the Pacific Coast Highway with sunshine kissing our faces and hair blowing out of control. Simply put, it’s fun.

The EP is currently available for download for just $3.96 — well worth the price given how many times you’ll want to click ‘replay’ on every track.