There are a handful of living legends in Vancouver and Red Robinson is certainly one of them. A radio and television pioneer, he was the first Vancouver disc jockey to play that “rock and roll” music and was the emcee for Elvis’ Vancouver tour stop at Empire Stadium in 1957. 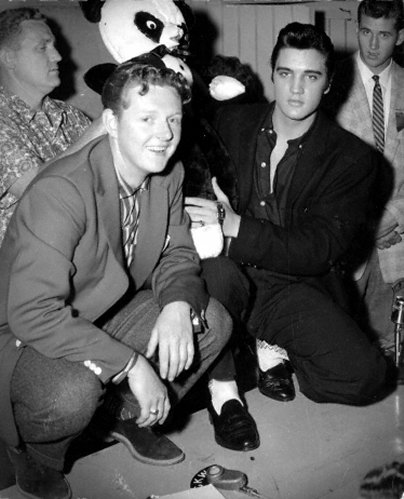 Since his career began at the age of seventeen, Red has been a television host, disc jockey, feature writer for TV Week, program director at radio stations throughout the Pacific Northwest, co-authored books, interviewed hundreds (if not thousands) of celebrities, and was even celebrated at the opening of the Rock and Roll Hall of Fame in 1995.

For 20 years he hosted “Timmy’s Christmas Telethon” on the CBC, helping to raise over $75 million for the BC Lions Society for Children with Disabilities. He’s won countless awards, received honors such as being inducted into the Canadian Broadcast Hall of Fame and the Rockabilly Hall of Fame, and earned local distinction on the North Shore and in his birthplace of Comox, BC.

To top it all off, Red’s kept up a blog since 2008. It’s not often you read a blog post where the author talks about his efforts to get Elvis to come to town:

“Vancouver was the biggest success story on the whole tour. I was proud to be part of the success that day as I had tried in vain to get Elvis here for a year and a half. This was the first celebrity to ever rent stadiums and he could do it because he was a giant, even then.

He had completed two movies, had great success with his recordings up to that time going to the top of the charts and his appearances on the Milton Berle, Ed Sullivan, and Steve Allen TV shows were ratings monsters. He was a true sensation. I have always stated that this was his biggest show of that tour but to hear Elvis himself say that it was is the icing on the cake.”

Red’s blog includes posts about upcoming acts at the Red Robinson Theatre in Coquitlam as well as posts laden with classic photos and tales of rock and roll. Posts like Theme for Teens, 1955, Love Me Tender at the Capitol, 1956, and Georgia Auditorium, Circa 1959 are pure gold. He even first met one of my personal idols, historian Chuck Davis, “on a double date in Victoria in 1956.”

The website Riveting Riffs profiled Red and featured a quote of his about how he used to crowd source (before “crowd source” was a buzz word) the music he played on the radio:

“I had a little thing that I put together called teletune. I had kids come in after school and answer the phones. I would say phone in and tell us what you think of this new song and then at the end of the day I would add them all up. Then I knew what to play. I was actually asking the listeners what the hell they wanted to hear (laughs). It was a top ten by my listeners. I had my personal top ten, but I would give it to the audience to pick out (their top ten). I had Buddy Holly’s “That Will Be The Day,” listed in my top ten in Cashbox before anyone else in North America even played the damn thing. I have an interview with Buddy Holly when he says that.

We didn’t have music directors saying, ‘The focus group didn’t go for that or ‘it’s not appearing on the charts in Chicago.’ Who gave a damn, you did it for your local audience. One of my slogans was “The Station That Listens To You.”

Today is Red Robinson’s 75th birthday and we are so fortunate to have such a passionate and innovative icon in our community.

Read more about Red on his blog, check out the reunion listings, and browse the amazing memorabilia that he’s been putting up for sale on eBay.

Share7
Tweet
Share1
Pin
Email
Reddit
WhatsApp
8 Shares
Current Contests on Miss604
*All contests are open to residents of Canada only, unless otherwise stated. Contest timelines are published on each individual post along with entry methods. Some contests may only be open to those 19 years of age and older. Winners are announced on the contest blog posts. Contest policy »