Chances are you’ve passed by quite a few of Charles Marega’s pieces around Vancouver, perhaps several times daily. The Italian-born sculptor moved to Vancouver in 1909 and taught art in town for 30 years. He was commissioned to create some of the city’s most popular public art pieces including the following: 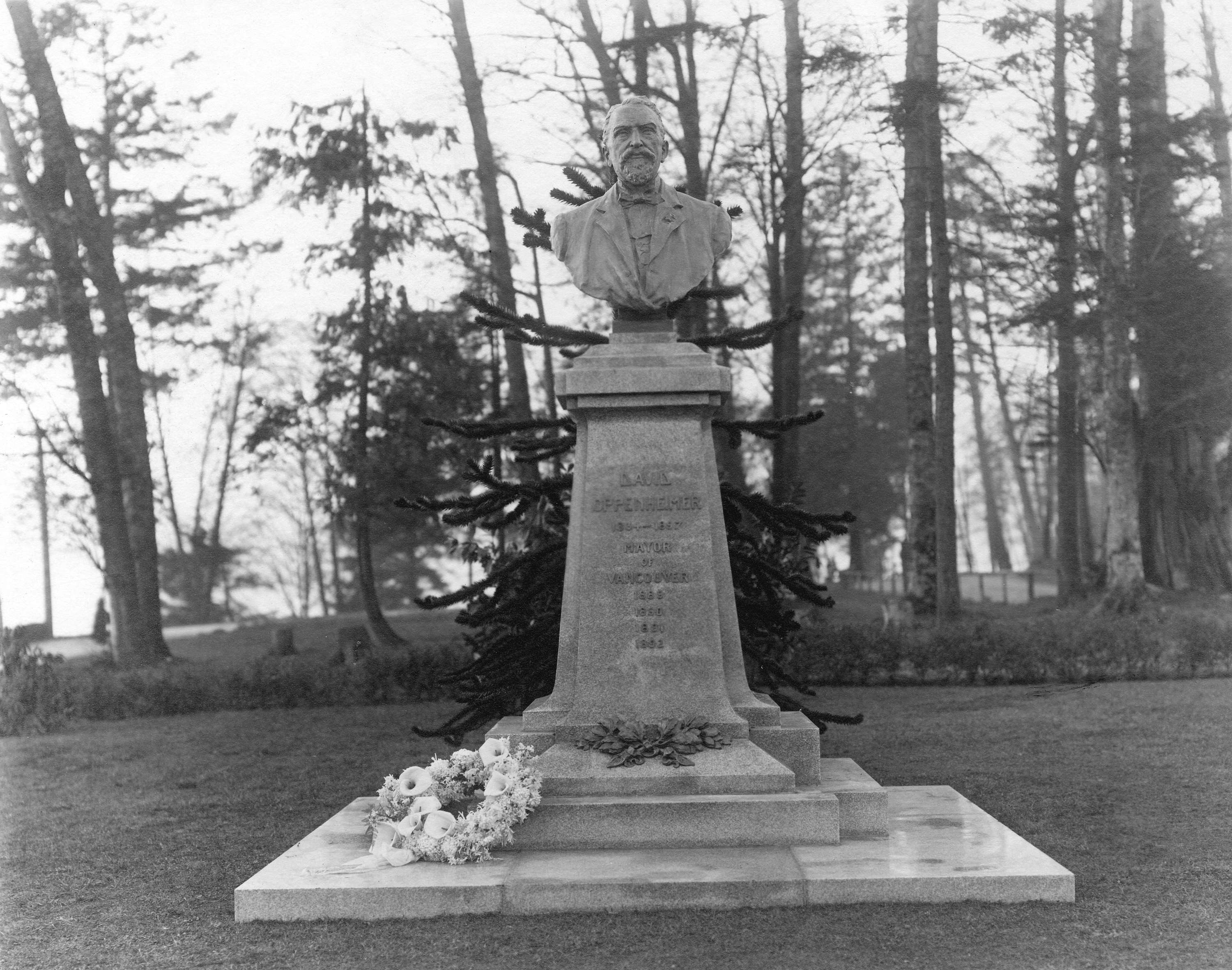 David Oppenheimer
The 1911 bust commemorating Vancouver’s Mayor (1888-1891) is located along the Beach Ave entrance to Stanley Park. “The original budget for the project was $50,000, but by the time Marega was commissioned in 1910, the project had become a bust for $4500, of which Marega was paid $3600 and the balance paid for an elaborate unveiling ceremony.”1 Read: Vancouver History: Oppenheimer. Captain George Vancouver
Marega was commissioned by the Vancouver Canadian Club (for $5,000) to build this life-size tribute to Captain Vancouver. This full figure bronze statute stands on the North side of City Hall and points toward the harbour. “The statue was cleaned in 2001, 65 years after its installation and in time for the city’s 115th birthday. The bill for cost of cleaning was $5800, almost the same amount as the original statue cost.”2 President Harding Memorial
This bronze and granite piece is located in Stanley Park between the pavilion and Malkin Bowl, where President Harding gave a speech just a short time before he passed. The Kiwanis Club pooled funds and hosted a competition to see who be commissioned for the piece. Marega won.3 Read: Vancouver History: American Presidents Joe Fortes Fountain
Lifeguard Joe Fortes, who lived down in English Bay, was named Vancouver’s “Citizen of the Century” and taught hundreds of local children to swim. His funeral in 1922 was the biggest in Vancouver history. The drinking fountain is in Alexandra Park along Beach Ave. Read: Vancouver History: Joe Fortes

King Edward VII Fountain
This fountain tucked beside the Vancouver Art Gallery along Hornby. Marega was commissioned in 1912 and the fountain was prominently displayed on the front lawn until 1966 then it was put away in storage. In 1983, when the art gallery moved into the space, the fountain was placed on the West side of the building. Read: Vancouver History: Fountains Lions Gate Lions
The two lions at the South side of the Lions Gate Bridge were Marega’s last commissioned work in 1938. Marega enthusiast Peggy Imredy said that after his wife passed away in 1936, “all his vitality left him then. He was devoted to her throughout his life. People who knew him only in the late ’30s have a different view of him. They see him as a shrunken and poverty-stricken artist.”4

Two months after the lions were placed at the bridge, in January of 1939, Marega passed away at the age of 67. His obituary in The Province said he was “acknowledged to be the greatest sculptor in Western Canada.”5 Additional works include the heads of Vancouver and Burrard on the Burrard Bridge, and a crest on the Seaforth Armory.