The Westin Grand on Robson has been keeping a secret, Hidden Tasting Bar & Social Lounge. After coming in off the sidewalk near Robson and Homer, head up the large winding staircase toward the hotel’s lobby and there you’ll find Hidden. Windows stretching to the height of the massive ceilings surround the purple-coloured dining area lined with rounded booths. Here’s a sampling of the tapas-style dinner John and I recently shared at Hidden: Bites
We started off by ordering a bowl of roasted hazelnuts, brazilian nuts and almonds ($5) while we looked over the beer list and the rest of the seasonal menu.

Earth
We’ve become big fans of beets lately and we really enjoyed medley that was offered. It actually went very will with a handful of roasted hazelnuts and almonds that we still had on the table. Sea
Our friendly server, Bob, recommended these two dishes (below). I heard another server recommend them as well but he told us that he’s in love with the lobster poutine. My favourite of the two though was the black cod as it simply melted in my mouth – a nice follow-up to our crunchy appetizers. Land
We went back and forth on this one as we were unsure if we had enough room left in our bellies. The temptation of something “bacon-wrapped” got the best of us and we’re glad we went through with it. Along with the black cod, the striploin was my favourite of the night. Indulge
Ready to skip dessert, Bob assured us that the flight of crème brûlée would be the best way to round out the night. We once again heeded his advice and were not disappointed. The three dishes each had their own flavour: nutmeg, cinnamon, and vanilla. “All together, you get eggnog!” said Bob with a smile.

John and I decided to take advantage of the beer list, over the wine list, that evening. I went with the Whistler Bear Paw Honey Lager, Phoenix Gold from Phillips Brewing, and the Whistler Brewing Whiskey Jack Ale. John’s selections were the Double Decker IPA (he was a little disappointed there was only one IPA on the list), St-Ambrose Apricot Wheat (a bit of a miss as he’s not big into flavoured beer), and the 650ml Phillips Longboat Chocolate Porter, which was his favourite of the night. The Chocolate Porter even complimented dessert with its cocoa, coffee, and cola notes.

Due to the inexpensive “bites” menu and the list of over 40 BC craft brews, we decided that Hidden would be our new go-to place before a Whitecaps game or show (at the QE Theatre or The Centre). Although now that I’ve told all of you, it’s not so hidden anymore. 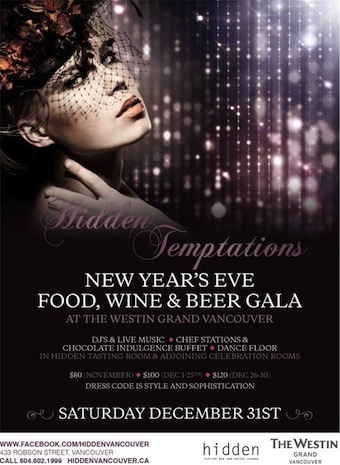 This food and wine gala will have gourmet chef stations, a chocolate indulgence buffet, live music and DJ’s, and more.

The Westin Grand and Hidden have offered up the Hidden Temptations New Year’s Eve experience to one lucky reader of mine. The winner will receive 2 tickets to the party and a 1-night stay in a one-bedroom suite that night.

I will draw one winner at 11:00am next Monday, December 19, 2011. Must be 19 years of age or older to enter and win. Please enjoy your New Year’s Eve events responsibly and plan a safe ride home.

Update The winner is Brenda!