The Vancouver Canadians won the Northwest League title today at Scotiabank Field at Nat Bailey Stadium. It was a one-game, winner-take-all game against the Tri-City Dust Devils and the Canadians came out on top. 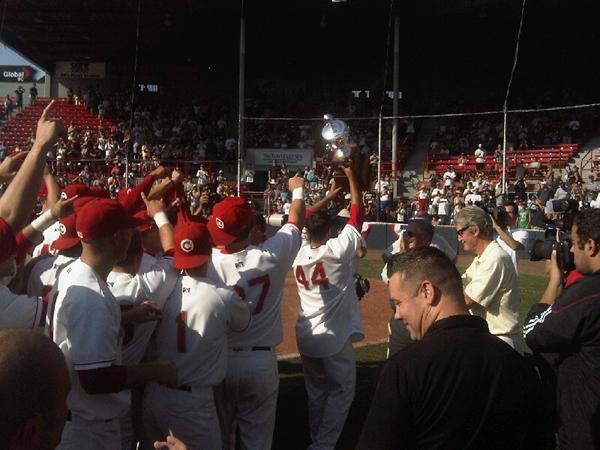 The Canadians are the minor league affiliate of the Toronto Blue Jays and enjoyed a high number of sell-out crowds at home this season with a record attendance of 162,162 fans (according to their Twitter account). With plenty of sunshine, lots of action, a unique dance team and one of the best ticket deals in town, there’s no wonder Vancouver had baseball fever this summer.

The Canadian affiliation also helped the popularity of America’s Passtime quite a bit and the C’s even started off the season with six Canadian-born players. I also got more into baseball this year after watching all 10 innings of the Ken Burns Baseball documentary series. I admit, it took me 30 years to come around but I think the game is really growing on me. Marrying a man from the Midwest and playing catch the at Field of Dreams movie site helped a bit.

I was also proud to host three ticket giveaways (and the chance to throw out the first pitch) with the BC Sports Hall of Fame this season. Thanks to the Hall, my readers and 27 of their friends were able to attend games this season.

This is the Vancouver Canadians’ second title. They also won the Pacific Coast League championship in 1999 [source: Bob Mackin].

Congratulations to the Vancouver Canadians on bringing home the title today. Follow them on Twitter @VanCanadians and on Facebook for news and updates throughout the rest of the year.