Thanks to the BC Sports Hall of Fame, I’ve been able to send 20 people to Vancouver Canadians games this summer and profile some inspirational hall of fame inductees (Week 1), (Week 2).

With BC Place Stadium re-opening this gall, the BC Sports Hall of Fame will have a newly remodeled home and they will continue to celebrate the achievements of British Columbians in sport throughout history. Today’s featured Hall of Famer is Arnold Hallgren who was the first BC baseball player to make the 40-man roster of a major league ball club. 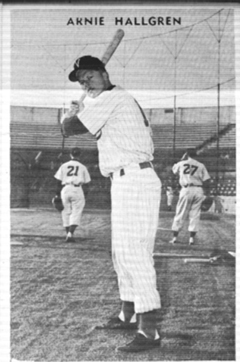 Before Ted Bowsfield, Larry Walker, and, more recently, Jason Bay, it was Arnie Hallgren’s trail around the bases that BC’s Little Leaguers wished to follow…

…In February 1953, Hallgren, age 19, was invited to attend the Boston (later Milwaukee and now Atlanta) Braves spring training in Florida. He was extended $6 per day meal money and $25 per week for expenses. Yep, times were a little different then. Ted Williams was in the twilight of his career; Mickey Mantle and Willie Mays were on the rise. And the American and National Leagues comprised 16 teams, not the 32 of today’s watered down, 8-figure annual salary that bears little resemblance to the baseball of yesteryear.

…Hallgren returned to his hometown in 1954, when the Braves loaned him to Vancouver of the Western International League, where he played outfield for the pennant-winning Capilanos. In 1955, with Boise of the Pioneer League he won the league’s batting championship, hitting .348 with 171 hits and 139 runs batted in. He followed that up with another batting title in 1958 in the Northwest League. Read more about Arnold Hallgren…

I have one more giveaway in this series so here’s how you can enter to win 10 tickets as well as the chance to throw out the ceremonial first pitch Monday, August 15th when the Canadians take on the Salem-Keizer Volcanoes.

I want to throw out the first pitch & win 10 tickets to see @VanCanadians thanks to @BCSportsHall & @Miss604 http://ow.ly/5Te4l

I will draw one winner on Monday, August 8, 2011 at 10:00am. The winner will need to confirm their attendance within 24 hours to ensure all arrangements can be made.

Update The winner is Val!