Outdoor movies are all the rage in Vancouver this summer but there’s a different form of open-air entertainment hitting Spanish Banks. Sea of Sand premiered at the beach this past weekend and the theatrical production will run until August 28, 2011. 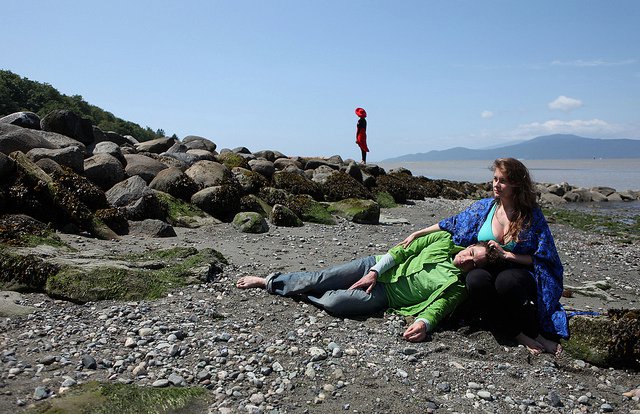 Photo courtesy of The Only Animal

The play follows a trio of characters: a man recovering from amnesia, the wife who doesn’t want him to remember, and a woman who washes up out of the sea, a shadowy figure from their past. Memory and desire are the twin rip tides at work in this lost-and-found story. What if forgetting is safer than remembering?

The soundtrack is provided by pedal and solar power (bicycle-run generators and sunshine) and the play takes place entirely at the beach, in and out of the water.

Doors (although there aren’t really any doors, or a curtain for that matter) are at 7:00pm, about an hour before sunset. Admission is by donation (although $10-$20 is suggested) and does deal with mature themes so it’s recommended only for those 12 and up. Warm clothing is recommended and chairs or blankets to sit on are welcome. You can reserve your spot now through The Only Animal’s website and find out more about the production on The Only Animal’s Facebook page.

In case a night of theatre at the beach –watching breaking waves as the sun sets and lights up the North Shore mountains– isn’t already enough of an ideal summer evening for you, I have a special contest prize pack up for grabs. The winner will receive up to tickets to the show as well as a catered meal for up to four people courtesy of Emelle’s Catering. From fresh organic greens and roast turkey to grilled BC sockeye salmon, the winner will be able to select their menu and enjoy their picnic on the beach prior to the evening’s production of Sea of Sand.

If you would like to win this gourmet picnic and night of theatre on the beach (valued at $200) here’s how you can enter to win:

I entered to win tickets to ‘Sea of Sand’ at Spanish Banks & a gourmet picnic from @EmellesCatering & @Miss604 http://ow.ly/63Eci

I will draw one winner at random from all entries at 10:30am, Thursday, August 18 2011. The winner will be able to attend the performance of their choice before the end of the run August 28th with up to three guests. They will also be able to select their menu, from three available options.

Update The winner is Shauna!

Update Miss604.com contributor Michelle Kim had the opportunity to see the play. Here is her write-up about the performance:

I love site-specific theatre and this summer, The Only Animal will be performing Sea of Sand on Spanish Banks. The play is about memory and centers around a man who is recovering from amnesia as he tries to piece together his past.

Written and co-directed Eric Rhys Miller says what makes this play unique is how vast the playing space is. “The piece test the boundaries of how large a space you can work with. We are currently working with hundreds of meters of space.”

Sea of Sand has been in the workshop process for years to see how to get around the technical difficulties of performing in such a large space and in and out of water. Miller says they’ve succeeded and hopes the audience will be pleased.

“We’re hoping that’ll it’ll be a little more that night of theatre and people will leave seeing space and the world around them a little differently because they just saw a performance someone where they didn’t expect to.”