The LA Galaxy are in town Saturday to take on our Whitecaps FC at Empire Field. While they’ll be without Beckham, the Galaxy’s stacked line-up should make for a great game against our hometown team. 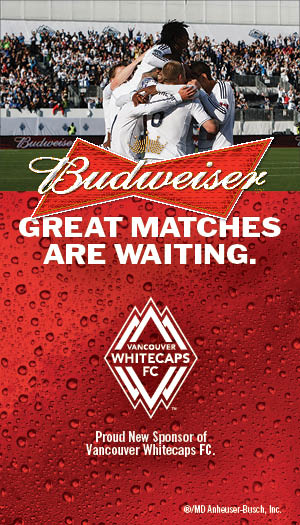 Although our record isn’t as favourable as we’d like to see it at this point in the season, Whitecaps games are incredibly fun to attend. The chants, the crowds, the North Shore mountains in the background, and a ton of energy can be found at every match.

To top it off, one of our own was recently named to the MLS inactive all-star roster this year.

Vancouver’s Eric Hassli was named to Major League Soccer’s inactive All-Star roster on Monday, and at training on Tuesday, his Whitecaps FC teammates couldn’t say enough good things about the striker. “Everyone has seen what Eric Hassli can do,” defender Wes Knight told MLSsoccer.com. “Unfortunately, they don’t get to see it on a day-to-day basis like we do. He’s just an incredible player and one of the best strikers in this league and it’s great for him to get that [honour].” [source]

Budweiser, as a proud new sponsor of Vancouver Whitecaps FC, is offering up three pairs of tickets so that my readers can take in the Galaxy game on Saturday at 4:30pm.

Here’s how you can enter to win.

This will be a quick contest as we’ll need to get winners’ names to the box office as soon as possible for this weekend’s game. I’ll draw three winners (who can each bring a guest) tomorrow afternoon at 3:00pm. Must be 19 years of age or older to enter and win. No purchase necessary. Please enjoy responsibly.