Today is the first day of the Neanderthal Arts Festival at the Vancouver Eastside Cultural Centre (July 21 to 30), a developmental festival featuring new and experimental work by local theatre companies, and one from Montreal. 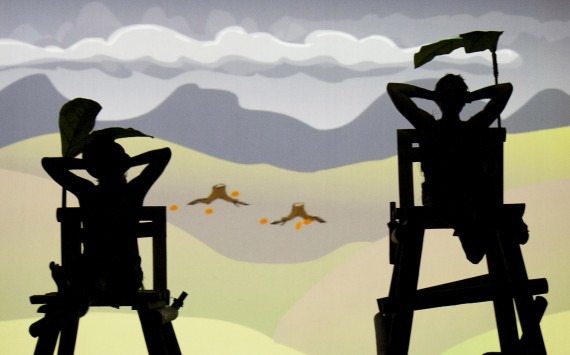 This year’s line-up includes a play about a pregnant man (My Pregnant Brother/Freestanding Productions), a musical about a bigamist (Homecoming King/Thirty Below Theatre), a Dadaist take on contemporary life (The Gas Heart/Gas Heart Theatre), a Beckett-like parable about a man building a chair (Chairs: A Parable/ITSAZOO Productions), and a verbatim-based theatre story about family communication (Other Side Through You/exit.left productions).

Though I’m going to try to catch as many plays as I can in next 10 days, I’m for sure going to see what ITSAZOO Productions has in store, as I’ve been a fan of their work for years. The company started in 2004 in Victoria and primarily does site-specific productions and “black box” shows (which is a theatre term that means they can bring their shows anywhere, like in a black box).

Written by one of the company’s co-artistic producers, Sebastien Archibald, Chairs: A Parable is a comedy that tells the story of three men as they attempt to build a civilized existence for themselves in a barren wasteland. But when one of the men builds a giant chair, everything in their new world changes.

“It’s an exploration of hierarchy in our society and looks at what it occurs and how it’s constructed,” says Chelsea Haberlin, co-artistic producer of ITSAZOO and director of Chairs: A Parable.

Though the play is absurdist and draws inspiration from existential playwright and Director Samuel Beckett, it’s been made accessible for this generation. In addition, there will also a backdrop featuring flash animation as well as found-sound musicscape playing throughout the show.

“It’s a simple story about a chair but it definitely explores big ideas.”

Presented as part of the Neanderthal Arts Festival, Chairs runs until July 30. For ticket information please contact The Vancouver East Cultural Center (“The Cultch”) box office. For more information, you can follow the festival on Twitter and Facebook.