The people of Vancouver can have their say when it comes to the Plaza of Nations through a series of Open Houses this month. The memorable performance area from Expo 86 has been stuck in development limbo over the last few years and the future of the whole North East False Creek (NEFC) are is currently being discussed. 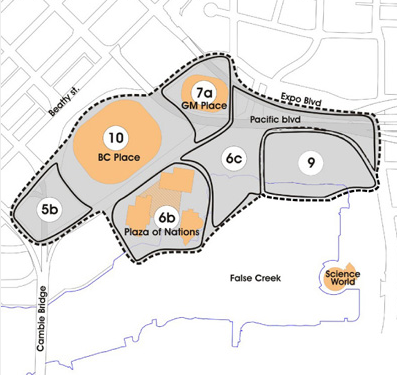 The High Level Review will identify policies, plans and strategies regarding the future land use, built form, urban structure, infrastructure requirements and public amenities for NEFC. The review will seek to clarify the future role of the area within the downtown, noting it is currently the location of transit-oriented citywide entertainment, sport and cultural activities. More specifically, the High Level Review will have the following objectives:

The NEFC area consists of the Cambie bridgehead/Concord Pacific site, the Plaza of Nations, the other Concord Pacific site near the viaduct, the Rogers Arena site, and BC Place stadium. The Open Houses will serve to inform the public about the latest proposal and spark discussions. I spoke with Devon Kuiper who is a member of the False Creek Residents’ Association about the plans for NEFC. “One thing that’s great with these two developers [Canadian Metropolitan Properties and Aquilini Investment Group] is that they’ve been really pro-active with the community.” He said they’ve been coming out to their monthly meetings, asking for input, being transparent, and making sure they can meet the community’s needs. A concern is also the area between Science World and the areas that’s laid vacant save for a few festivals, Cirque du Soleil tents, and Olympic pavilions. “A park was supposed to be supplied which hasn’t happened yet. There’s design for a beach, a wharf… it’s a big lingering plan,” Kuiper added.

Part of the proposal from Canadian Metropolitan Properties and Aquilini Investment Group over the Plaza of Nations site includes a 40,000 square foot public gathering place by the water, apartment buildings, and removal of the casino. Kuiper says it will completely change the look of downtown and “the designs are amazing”.

Open houses (where you can view the designs) will take place at the following times and locations:

You can review the site maps and council reports online in advance.