The China Creek Skate Park in East Vancouver is one of the city’s most popular. An interesting tale of community in itself, the skate park was built in 1979 (which makes it one of Canada’s oldest) and in 2006 the skateboarding community rallied to save the park as its future was threatened in a proposed beautification project. However, under the spraypaint tags and concrete there’s an even larger story to tell about China Creek. 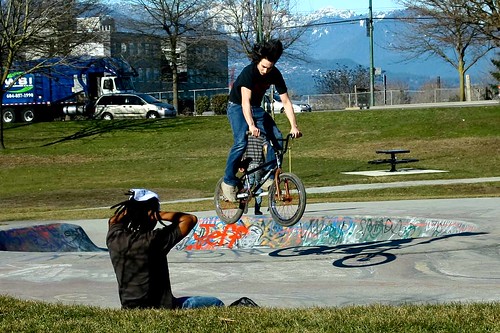 Winding back to the beginning of the park’s history, Charles Cleaver Maddams, a Mount Pleasant settler, bought five acres of land on the south shore of False Creek in 1888 and because of a nearby Chinese farm, he named the area (and the creek) China Creek. In the 1920s he gave the land to the city which then wasn’t developed until the 1950s.

Now a quick reminder, in those days False Creek’s shoreline came all the way into where Clark Drive is today. As the False Creek back-fill began around the time of the first World War, railways and transportation from New Westminster to Vancouver was the priority. However, something had to be done about the dozens of creeks filled with life, such as spawning salmon, flowed down to the False Creek flats.

Chuck Davis explains more is the following post from Vancouver History that references an article by Randolf Kjorrefjord, published by Vancouver Community College in 1951 when construction began on China Creek Park:

The China Creek system was the largest drainage basin in Vancouver, with over 60 kilometres of creeks that converged at Clark Drive and 11th Avenue. Its name originated from a Chinese pig farm in that vicinity during the early 1880s. If the four creeks that fed Trout Lake are included, a total of nine creeks made up the entire China Creek system, which had the task of draining the district lying between Victoria Drive and Knight Road as far south as 45th Avenue. This great drainage system also had a rather impressive ravine, about 200 feet across at street level where it crossed Broadway, and north towards 7th Avenue. The ravine’s depth varied between 30 and 40 feet, over a distance of some 2,000 feet. During the 1920s and 30s, the City used China Creek ravine as a garbage dump. Eventually, local residents complained of the smell and potential health risk. In 1951, the mighty China Creek that had flowed for so many years and functioned as home to fish and young boys alike, was finally put to rest in a pipe.

In July of 2005, Terry Glavin wrote “Rivers Run Beneath Us” in the Georgia Straight:

Try to imagine, underneath streets of East Vancouver, a small river, with at least eight major tributaries, pulsing nutrient-bearing salmon in ancient cycles throughout a vast area of forest and marsh bounded by East 41st on the south, Grandview Highway on the north, and the hill country around Victoria Drive on the east.

The little river ended up with the delicate-sounding name of China Creek, and its estuary used to be in the vicinity of Great Northern Way and Clark Drive. Back then there was a broad, shallow arm of the sea where the railyards are now. Terminal Avenue runs through the middle of a place that was once watery and alive with sturgeon, oolichan, flounder, salmon, crab, mussels, and clams.

Stories like these put the yellow, painted image of a fish near a storm drain in a whole new light.

You can discover more of the Lost Creeks of Vancouver on the City’s website. Get involved and learn even more about the False Creek area’s biodiversity through a series of walks, stories, and community maps available throughout the month of March and April. A part of the “Water Beneath Our Feet” project, a public open house will also take place tomorrow, March 31st at Rhizome CafÃ© (317 East Broadway).

China Creek has been nominated for the Vancouver Heritage Foundation’s “Places that Matter” campaign along with over 200 other sites. You can vote for your favourite places now on voting form 1 and form 2.

Share30
Tweet
Share4
Pin
Email
Reddit
WhatsApp
34 Shares
Current Contests on Miss604
*All contests are open to residents of Canada only, unless otherwise stated. Contest timelines are published on each individual post along with entry methods. Some contests may only be open to those 19 years of age and older. Winners are announced on the contest blog posts. Contest policy »