Yesterday I was along for the ride as Trevor Linden ran around Vancouver unloading $7,000 in 7 hours for the THRiVEtastic campaign. He was selected by ING Direct to compete against Henry Burris (Calgary), Amber Mac (Toronto), and Tammy Verge (Montreal), by spending money using their new Thrive ‘fee free’ chequing account. Each participant received $15,000 for the charity of their choice upfront (Linden supporting the Trevor Linden Foundation), and if they clocked the best time, they would get an additional $15,000. 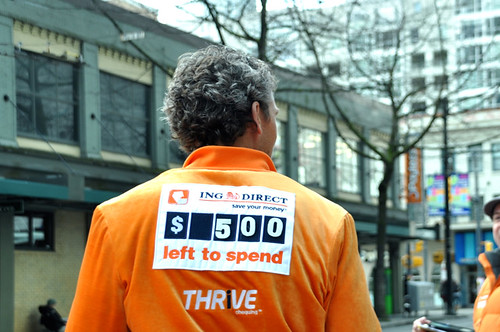 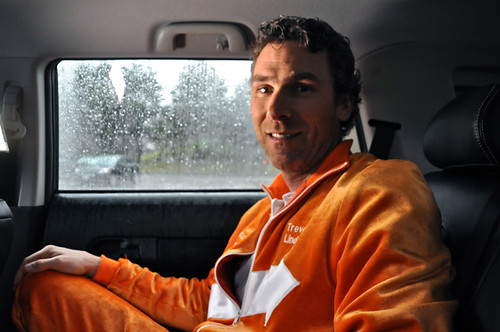 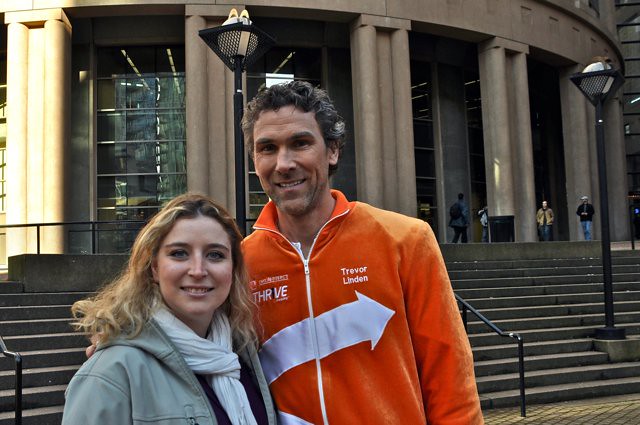 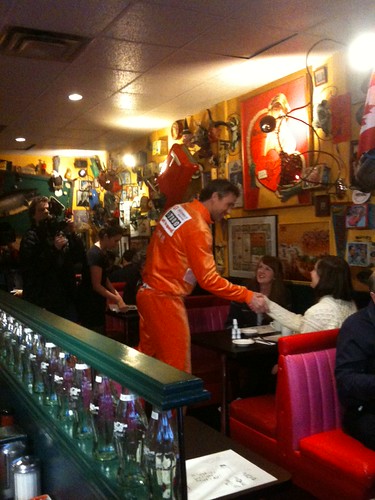 Stop 1: Buying breakfast for everyone at Sophie’s Cosmic Cafe. Stop 2: Covering admission for 3 bus-loads of young students at the Space Centre. Stop 3: Heading to Vancity Sports to purchase jerseys and t-shirts. Stop 4: Buying bundles of rain coats at MEC for donation that afternoon. Stop 5: Visiting Templeton Secondary School in East Vancouver. We met in their Sacred Room for a presentation, talk, and viewing of one of the student’s own music videos (below). It was so powerful and so well-done. The student wrote the song and made this video himself, inspired by his own struggles and his mother’s story.

After the private meeting, Trevor bought over $600 worth of pizzas for students to devour in the cafeteria. He presented two students with signed jerseys and donated a signed jersey to the school for future fundraising purposes. Stop 6: Donating the rain coats to a shelter on the Downtown East Side as well as making a cash donation. For privacy purposes I won’t say which but, the t-shirts were also handed out to passers-by and Trevor was signing them on the spot. Stop 7: Visiting the ING Cafe on Pender and Hornby where Trevor met with Meena Sandhu and paid bills for several people who stopped by. He also made a donation to KidSport BC. Stop 8: Picking up some treats at the Candy Aisle on Robson. Stop 9: Making a donation at the Vancouver Public Library, then handing out the candy along the plaza. Henry Burris ending up being the winner yesterday however the Trevor Linden Foundation still received a nice boost, as did the rest of the causes we visited.