I am currently in Ghana to experience Cadbury’s Bicycle Factory delivery. This is their second delivery in two years thanks to the help of Canadians who participated in the online project.

Our second day of community visits in Ghana took us to the Nsiana, almost two hours outside of Kumasi City. While the region we were in the first day was cared for by the Kuapa Kokoo fairtrade union and World Vision, I learned that Nsiana is a Care International community. 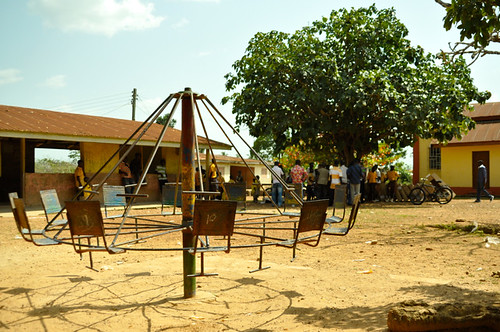 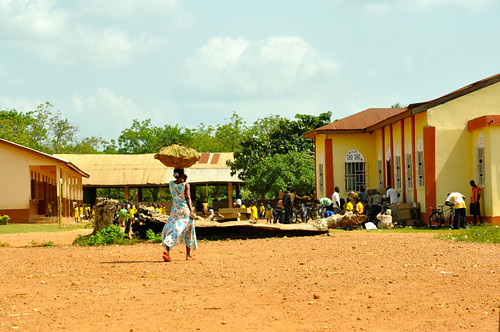 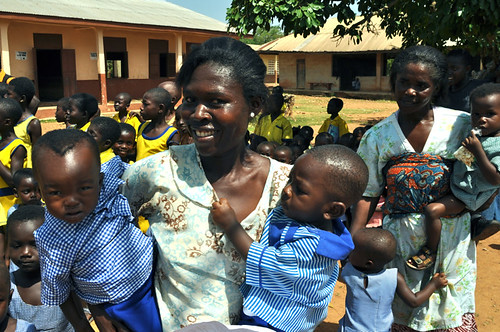 The woman in the photo above called me over from across the dusty field to ask me to take photos of her children. She said she wanted me to take pictures so that they can be sent more food. There was such a flurry of activity I don’t think her words had a chance to sink in; I am still thinking about them. I told her my name and throughout the day, she would continue to call me over to take shots.

The woman in the photo below, who I believe is a teacher at the school, also asked me to take photos of her class as she lined them all up. 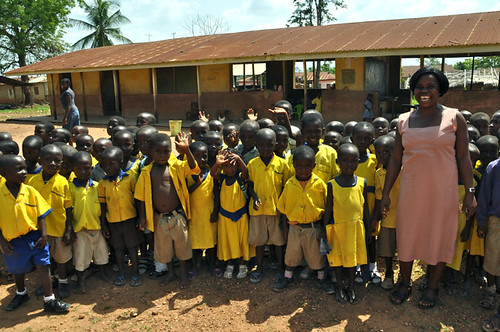 This man’s name is Alexander, Alexander The Great he said. 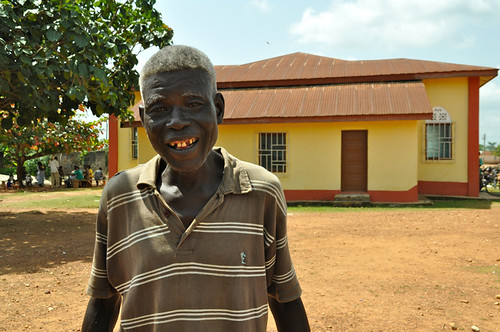 The school children in Nsiana were incredibly excited to see us all. They crowded around as close as they could and would touch my arm or hand every now and then to wait for me to look over and smile. 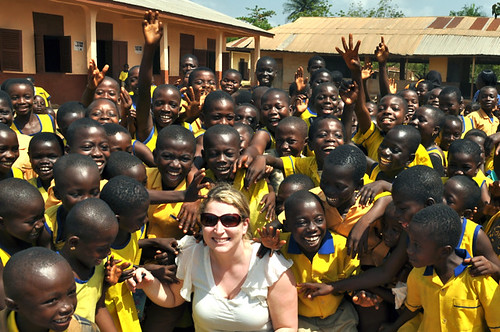 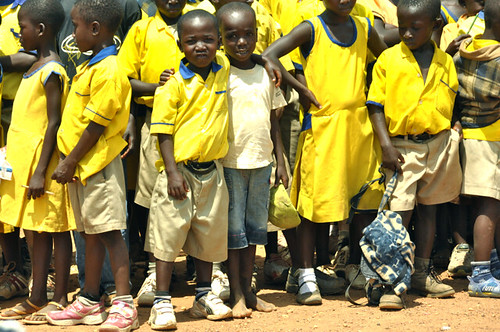 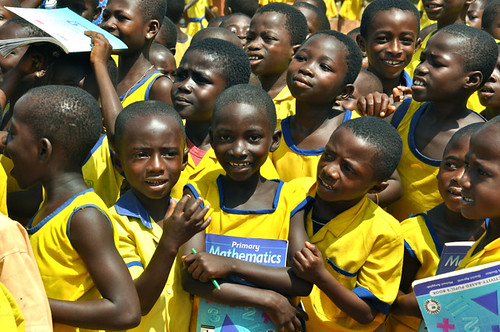 The boy in the photo below was proud to show me his school work and his writing. He had copied down the books of the bible and told me he also knew them by heart. 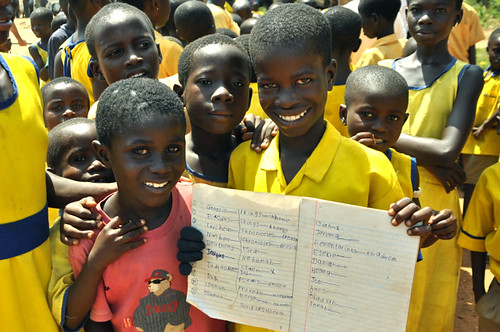 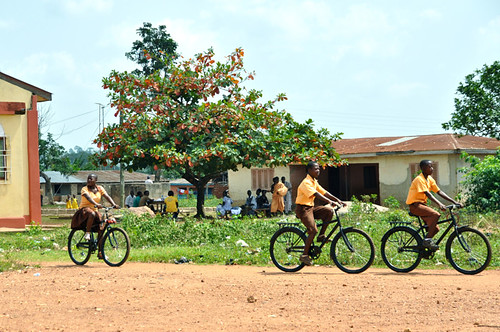 After the bicycle dedication ceremony we presented the Chief and the head teacher of the school with supplies (books, pencils, games, crayons, and more). The supplies were then divided up into big metal bowls and carried off to the school house. 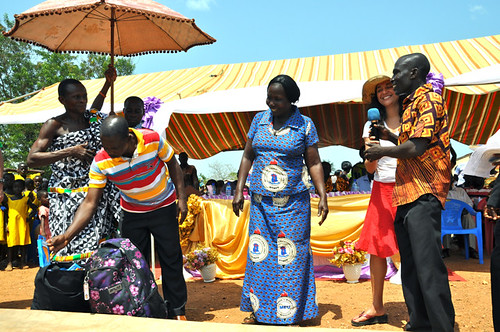 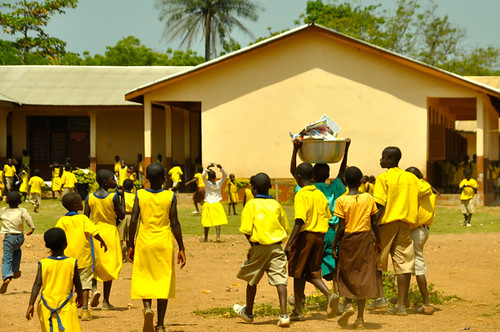 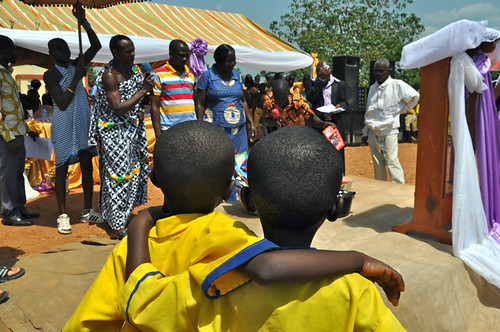 We spent the rest of our time in the community visiting with children, mothers, teachers, and learning about the work that Care International is doing. Nsiana received a shipment of bikes in 2009, from the first edition of the Cadbury Bicycle Factory, so we also had the chance to speak with past recipients. 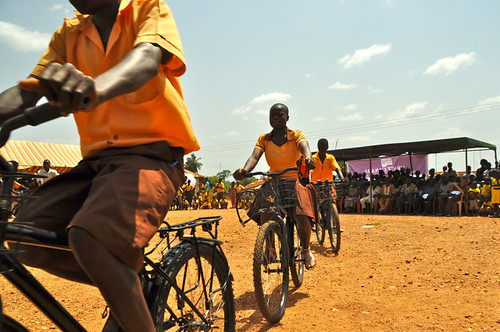 I plan on writing detailed posts about the cocoa industry and the specifics of the bicycle factory deliveries in a few weeks, however I thought it would be important to mention the following items right off the bat: 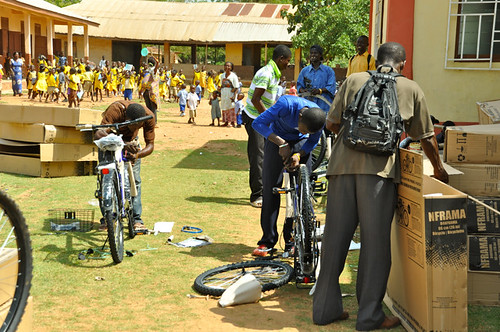 First, the delivered bikes are put in the charge of community leaders who are responsible for distributing them to their children and youth. Second, the communities receive training and tools from David Peckham and the team he’s assembled from the Village Bicycle Project. These two steps ensure that the bikes are not simply dropped off without care and that the communities can self-manage. 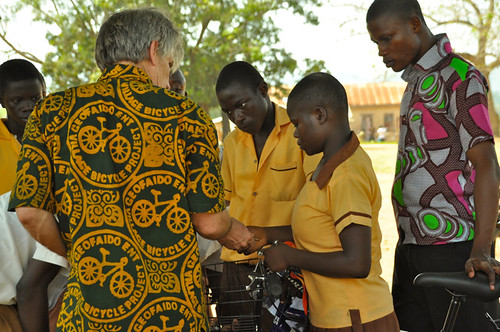 David told me that it was rare to see a girl with such interest in tuning the bikes. It’s still considered more of a boys’ activity and girls can sometimes be teased or mocked for their involvement with bikes. It’s a barrier he and many others try to help break down and it seems to be working, slowly but surely. 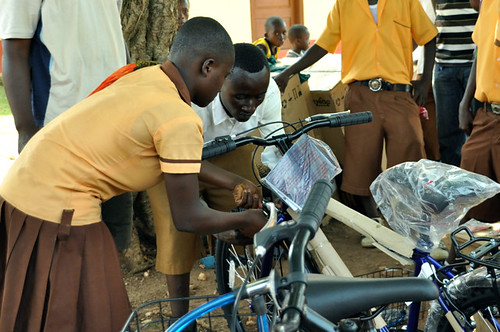 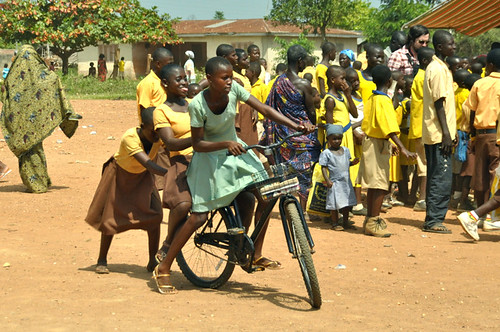 We haven’t been traveling too far out of major cities but within minutes you’re transported from bustling streets, honking horns, and billboards to groves of palm trees, children splashing in at well-water pumps, and random goats or chickens hustling across dirt roads. It’s one contrast after another but the universal language, I’m finding out, is that of a handshake, smile and dance whenever a good tune is played. 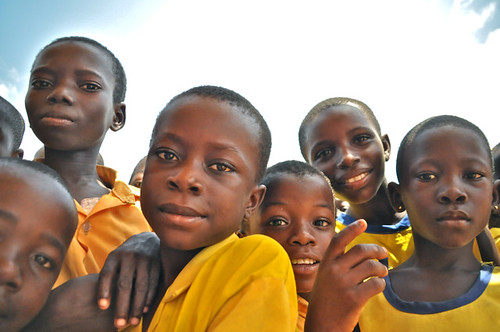 We return to the capital city of Accra tomorrow where I believe we will head out to another rural community before beginning the long trek home on Saturday.

Please note: Photos were taken with the permission of the community. You can view all of my photos in this Flickr set.

Disclosure: I have not been paid by Cadbury to participate in this trip. However, they have covered my accommodation and airfare to come along and document what I experience.

Share19
Tweet
Share7
Pin1
Email
Reddit
WhatsApp
27 Shares
Current Contests on Miss604
*All contests are open to residents of Canada only, unless otherwise stated. Contest timelines are published on each individual post along with entry methods. Some contests may only be open to those 19 years of age and older. Winners are announced on the contest blog posts. Contest policy »