Most parks in Vancouver are named after former Parks Board members or royalty – but not Emery Barnes Park in Yaletown. The grass, stone walkways, water features and new playground on Davie is named after a man born in New Orleans in 1929 who made his way to Canada, into BC Provincial Legislature and is forever in our history books. In 1952 Emery Barnes was an alternate for the US Olympic high-jump team, while he also played football for the University of Oregon and was drafted by the Green Bay Packers in 1954.

I was just out of the army, with a young family to support. I had a college degree but could not get a job. In fact I asked for help from an Oregon Alumni Booster Club Member who had tried to recruit me with athletic scholarship a few years earlier. I could not get to see him personally but was told they would try to get me a job as a Red Cap at the local train station. I had always believed in the United States, its constitution and the principles it stood for. I may have been naive but I believed all the slogans. When I left to play football in Canada I felt like a political refugee. [1987 Interview with Barnes]

It was football that led him to Canada, and ultimately Vancouver. His time in Green Bay wasn’t long and he found himself in the CFL, playing with the BC Lions when they won the Grey Cup in 1964 (although he was sidelined during the actual championship game). During this time he also attended UBC and received a bachelor degree in social work, which was a passion of his.

In the years following his football career, Barnes opened a nightclub at Harrison Hot Springs, visited Victoria and was pitched NDP and Social Credit party membership, then became the Director of Children and Teenage programs at the Killarney Community Centre.

It was Dave Barrett who encouraged him to move into politics. The first time he ran for the BC Legislature, Emery was not elected. At that time, the city of Vancouver was not as culturally diverse as today so he had less chance of success. Emery did not talk much about the barriers he faced even though, particularly during his childhood in New Orleans, he had suffered harassment which prompted his family’s move to the West Coast. [Reflections on Emery Barnes] It wasn’t until 1972 that he was elected to the BC Legislature and there he was re-elected for four consecutive terms and served our province until 1996. He and Rosemary Brown (NDP) were the first black politicians elected to a legislative office in British Columbia.

I see politicians as catalysts. Though not elected Martin Luther King was as much a catalyst as a leader. He happened to appear on the scene at a time when a little old black lady said she was tired and wanted a seat on the bus. Many people thought that was a reasonable request. [1987 Interview with Barnes

Barnes worked with the BC Black History Awareness Society (established 1993) to develop the Greater Victoria School Board’s curriculum, to build a cultural community in Vancouver for those of African heritage, and was the first president of the BC Black Cultural Association.

In 1994 he was elected Speaker of the Legislature in BC, the first black person in any Canadian province to hold this position. Barnes passed away on Canada Day, in 1998.

I am a Canadian citizen and have no regrets. Over the years I have come to realize that prejudice is not limited to the USA. There are different kinds of people in all societies. None is perfect. I am less quick to condemn anyone and have probably mellowed a bit. With age and experience I have come to believe that we are the architects of our own destiny. I am more interested in the evolution of society and of my situation as an individual than in blaming any group or any society for all the evils on earth. [1987 Interview with Barnes] 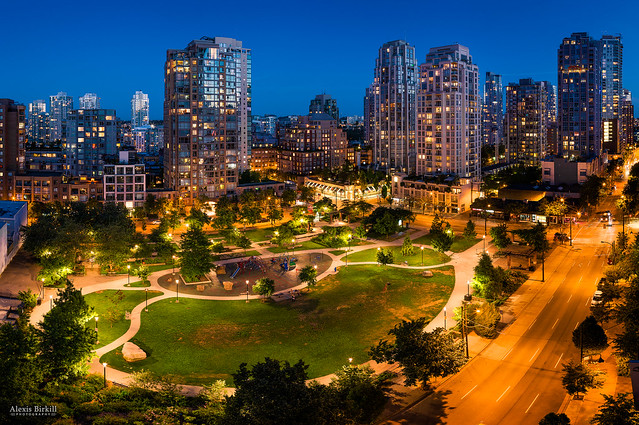 Emery Barnes Park opened in 2003 and recently expanded to fill up the entire block of Davie between Seymour and Richards.