A few months ago I put the call out on Twitter to see what people have been curious to know about Vancouver’s past. There were some great suggestions about Joe Fortes and the Great Fire along with several more tidbits that would be interesting to research. A few people asked about the Burrard Bridge and in particular, the enclosed space between the towers. To answer a few of these questions, here’s a brief history of the Burrard Bridge – from busts to bike lanes. 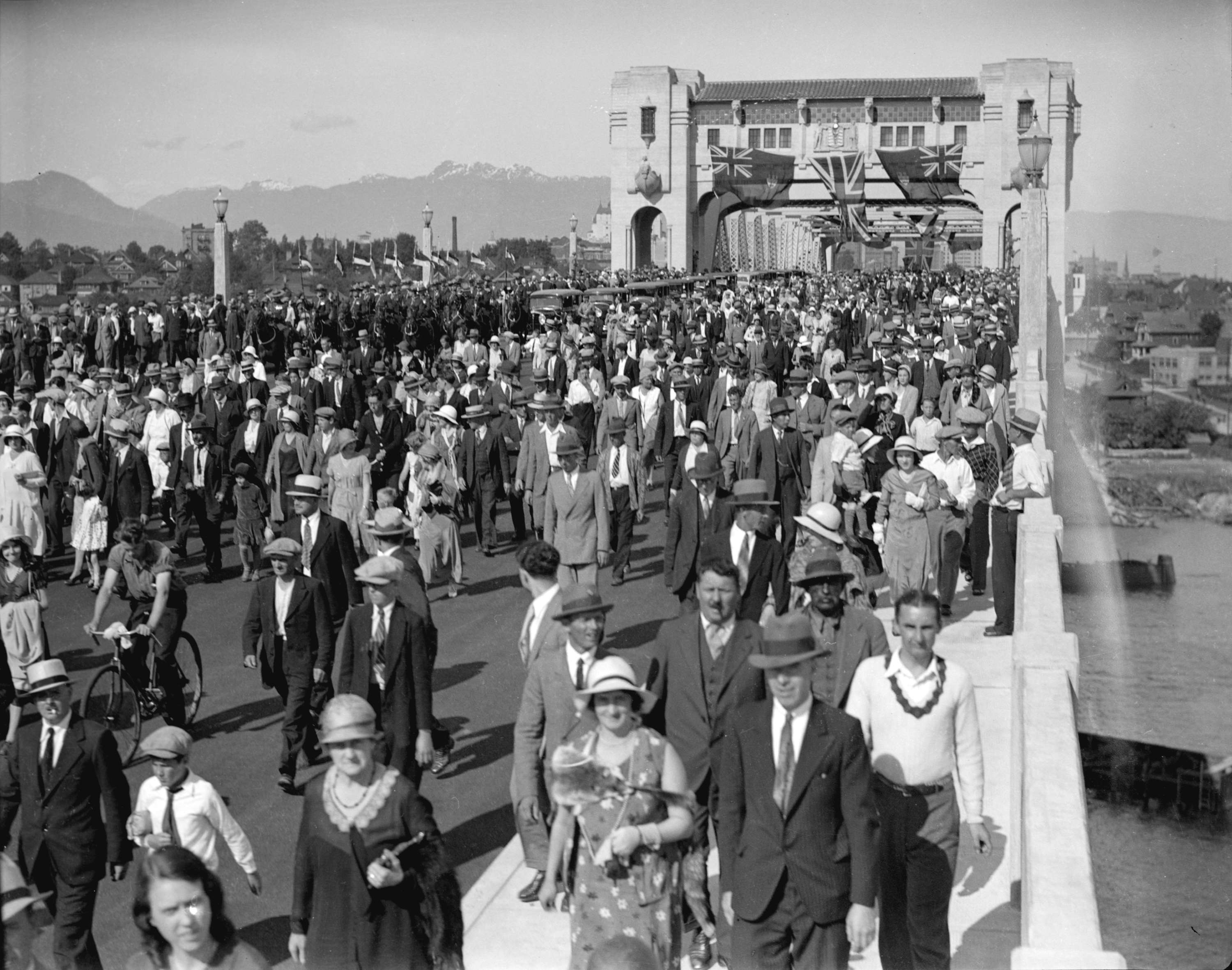 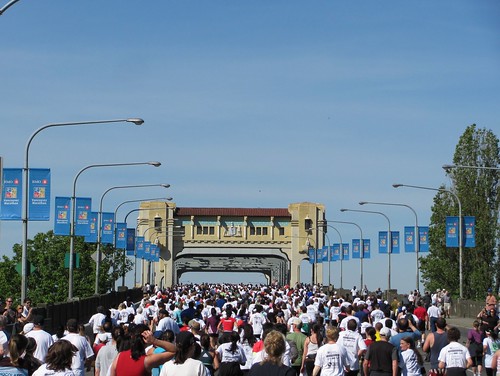 The basics are that the bridge was constructed from 1930-1932 in order to join downtown Vancouver with Kitsilano by going over False Creek. It officially opened on Canada Day, July 1st 1932 with “A snip of a pair of golden scissors in the hands of Mayor Louis D. Taylor.” [source]

Architect George Lister Thornton Sharp and engineer John R. Grant used various styles of trusses to create enough of a span for boats to pass underneath and also for the flow of traffic along the deck. The enclosed spaces between its towers on either end are referred to as galleries with small windows that peer out onto the traffic below. From what I hear, those spaces were never used for anything else (no actual gallery or office space) and are just there to hide the steel structure of the bridge. Other unused or now-defunct features include a stairwell from the deck to the beach that was shutdown in recent years as well as a railway bridge underneath the car deck that was scrapped. 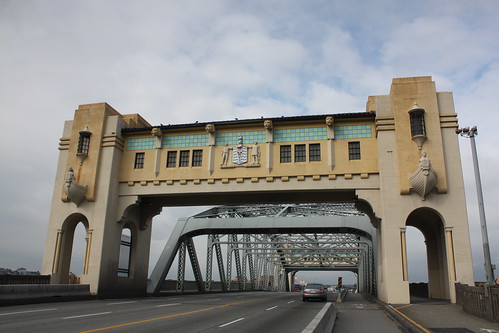 The lamps on either end of the bridge that flicker with a red glow at night are a tribute to Canadian WWI prisoners of war. [source] Vancouver’s coat of arms graces the front of the galleries while busts of Captain George Vancouver and Sir Harry Burrard-Neale adorn bows of ships that jut out from either tower, above pedestrian archways. I wrote a quick piece about the bridge a few years ago and discovered at that time that Sir Harry Burrard-Neale never even came within 5,000km of Vancouver at any time in his life. As he often did with waterways up and down our coast, Captain Vancouver simply named the inlet after an old navy buddy. 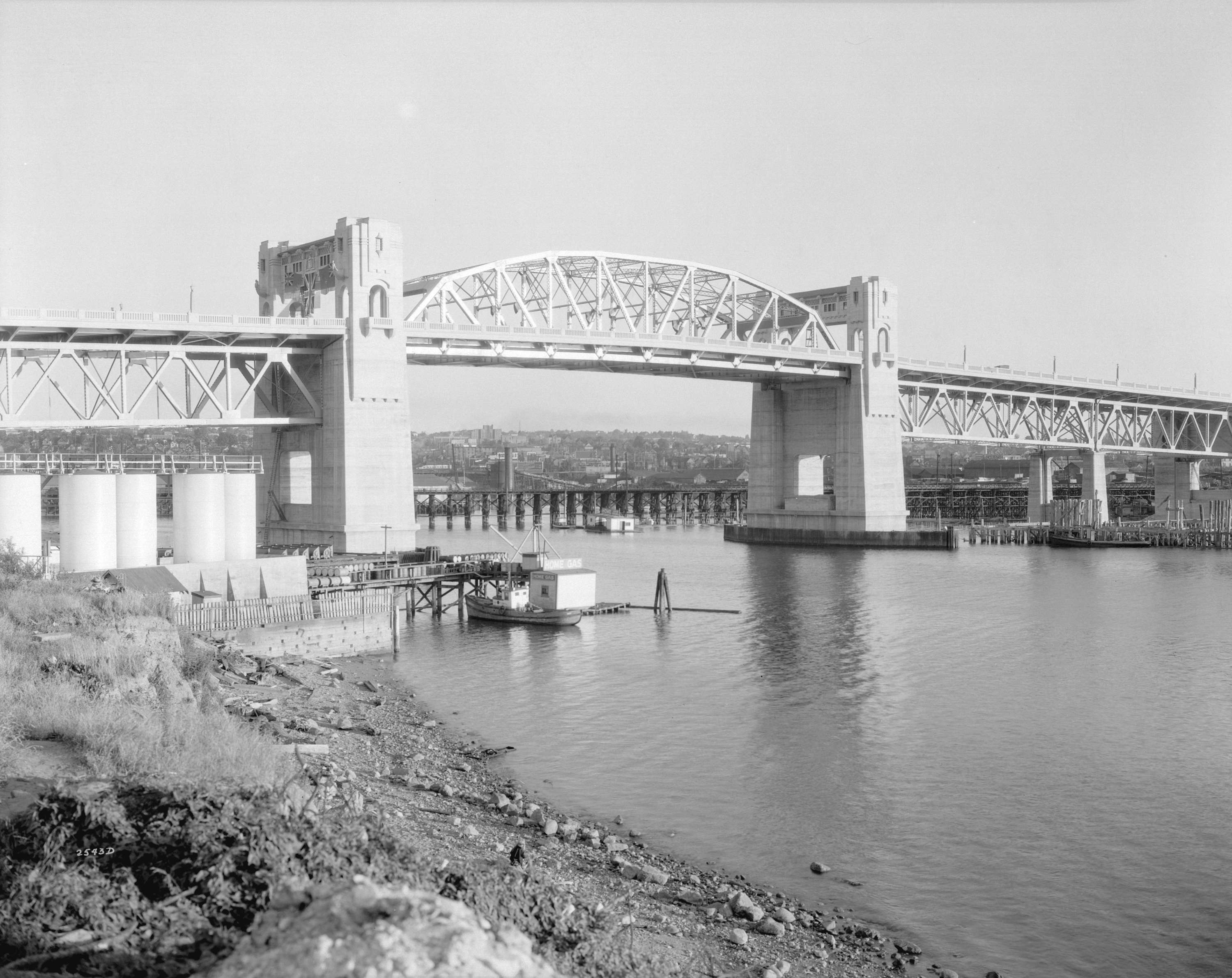 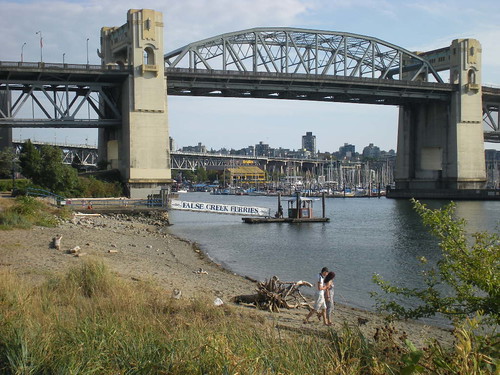 For many, this bridge offers the best views of a sunset of the annual fireworks in English Bay. The bridge was actually designed so that you can still enjoy the view even while you’re driving. According to the Burrard Bridge Heritage Study by Donald Luxton & Associates in 2001, the handrails along the bridge are meant to provide an unobstructed view of the bay when vehicles are driving between 40 and 64 kilometres an hour. This visual effect is referred to as “stroboscopic”. 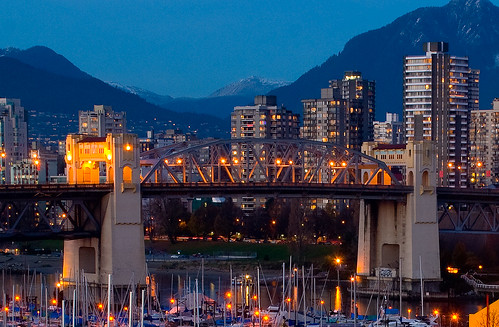 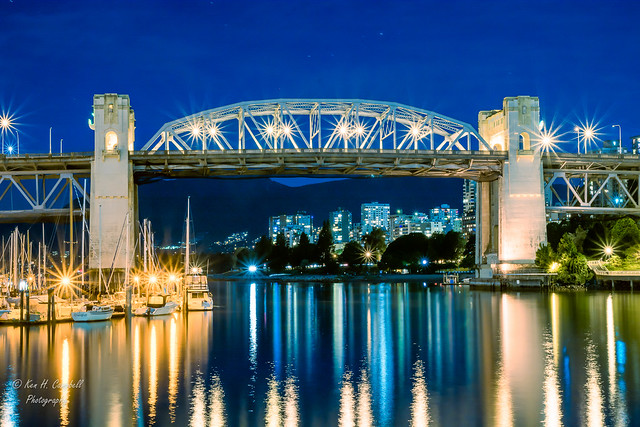 In 2007 the Burrard Bridge was listed on Heritage Vancouver’s Top Ten Endangered Sites and in 2009 it began a bike lane trial. It continues to link the downtown core with Kitsilano, Vanier Park, and UBC whether you travel by car, bus, bike, or foot. For a great view of the bridge at any time of day, check out the legendary KatKam webcam.

Also on Miss604.com
« Your Midtown Experience
October Events on the Sunshine Coast »