Those who grew up in Metro Vancouver or the Fraser Valley might still call it “Flintstone’s Bedrock City” (home of the 40-foot Fred) but Dusty’s Dinotown — North America’s only cartoon dinosaur town — will soon be extinct.

The attraction is set to close September 6th and they’re currently offering unlimited rides and a blowout on other activities before it closes its sabre-tooth gates forever.

After 35 years of business the pre-historic park in Bridal Falls, between Chilliwack and Hope, has sold off its 18 acres to a developer who will turn the area into an RV Park. It was recently reported however, that the City of Surrey is eying Dusty, pedal cars and all.

Owner Rob Ell told the Surrey Leader that he’s been approached by the City of Surrey, South Surrey, the Aldergrove Zoo, the City of Burnaby and even an ostrich farm to see if he would like to relocate Dinotown. 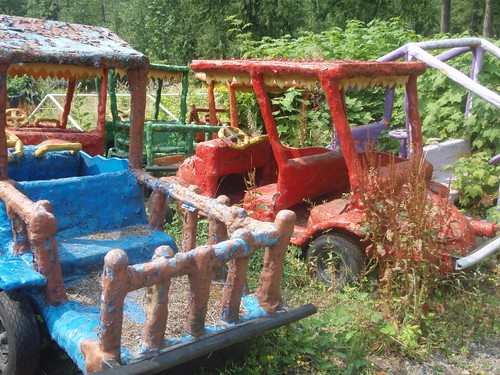 Though the popularity of dinosaurs has never waned, one wonders of the success a new cartoon Dinotown venture could achieve. Nevertheless, our childhood times spent at Bedrock City (in Mister Slate’s office and on the driving range) created lifetime memories.