On this day in Metro Vancouver history the SkyBridge, connecting New Westminster and Surrey (Columbia and Scott Road SkyTrain stations), opened to the public. 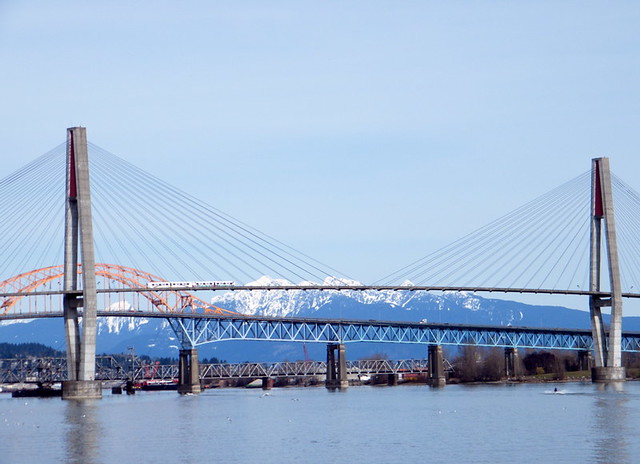 The $28 million transit-only structure was built by Kerkhoff Bridge and Industrial Division Ltd., of Chilliwack, and Hyundai Engineering and Construction Division Co. Ltd. of Korea. Construction had started October 28, 1987.

The 616-metre- (2,020 feet) long structure was part of a $179 million, 3.1 kilometre SkyTrain extension. It is set aslant the Fraser River to ease the curve coming from New Westminster. The bridge, which carries trains 50 metres above the Fraser, is the world’s longest cable-stayed bridge designed solely for rapid transit. There are two tracks, enabling SkyTrains to pass on the bridge. The 104 deck sections were built in Richmond, barged up the Fraser and then lifted into place by heavy equipment. Thirty-five thousand cubic metres of concrete (4,000 truckloads), 13.5 kilometres of stay cables and 13 kilometres of steel pilings were used in the construction. The bridge’s two towers are each 123 metres (404 feet) high. [Source: VancouverHistory.ca] 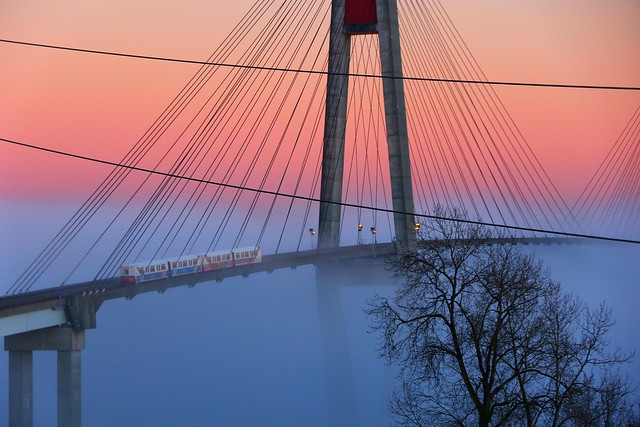 When I was a little girl we would drive over the Pattullo Bridge every Sunday. Along the way I would spot the progress of the giant columns that would come to hold up the SkyBridge, bringing the SkyTrain out our way. Every weekend they grew taller and without knowing what the final span would look like, it was always a treat to see how far it had come along. All finished up on March 19th 1990, it is still the longest cable-supported transit-only bridge in the world today. 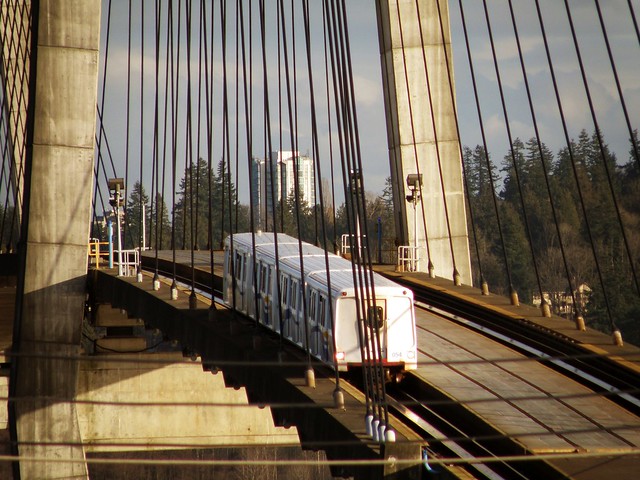 The SkyTrain has come a long way since Expo 86, with two more lines and millions of riders each year. It has hosted everything from Dance Parties and No Pants Flash Mobs, to car load of Canucks fans, and the SkyBridge has played an integral part of getting people from A to B. 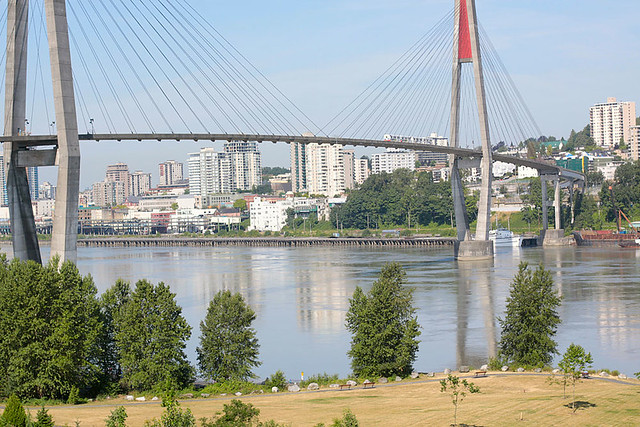 Happy Birthday SkyBridge! Here’s to increases in transit ridership and hopefully one day, SkyTrain or light rail expansion further through Surrey and the Fraser Valley.