It was the site of the Miracle Mile and where the Beatles took the stage in Vancouver, now after being demolished in 1993 Empire Stadium will once again be filled with cheering fans. 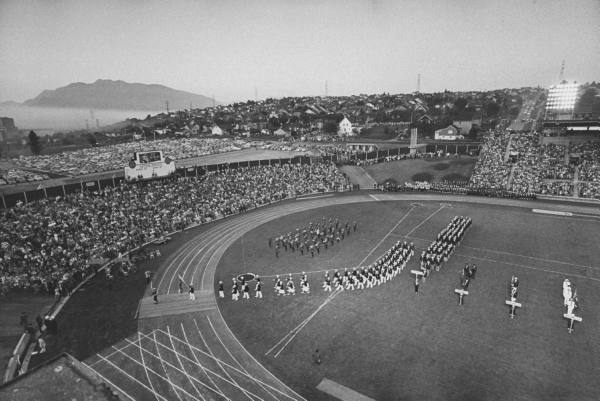 Here are some historic events that took place in the old Empire Stadium, located on Hastings right near Hwy 1 in East Vancouver:

While BC Place is otherwise engaged in 2010 with the Olympics and major renovations, the BC Lions will play their games at a new structure built on the site of Empire Stadium. Adjacent to the PNE (just East of the Coaster) it’s a great location with a fantastic North Shore view. The Vancouver Whitecaps will also play a few games at Empire once again during their inaugural MLS season in 2011. Here’s what the 27,500-seat temporary stadium will look like:

I’m looking forward to its return, in whatever form the incarnation may take. As my husband said last night, imagine a warm summer evening up in the stands with the aromas of the PNE’s candy floss and fresh popcorn wafting over the crowd as you take in a football game with a mountain backdrop. Sounds like a great Vancouver outing to me.

Update June 17, 2010 John had a sneak peek at the field this week. I posted his photos here.