After a night of good food in a wood-paneled room above the world’s largest whiskey bar we set out from our Hotel Waldhaus Am See to explore St Moritz on foot. 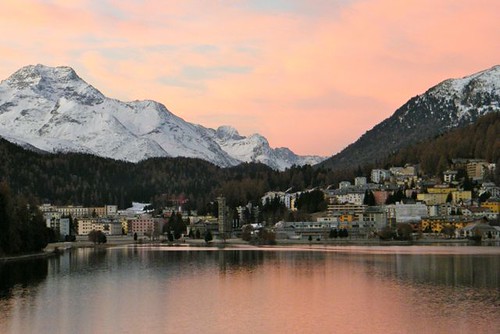 Our guide for the morning was John Webster, an Australian who traveled the globe and decided that there was no place better for him to live than St Moritz. He set up his life in this historic town (sitting at 1,800 m/5,910 ft above sea level) and is an extremely charming ambassador for the City. 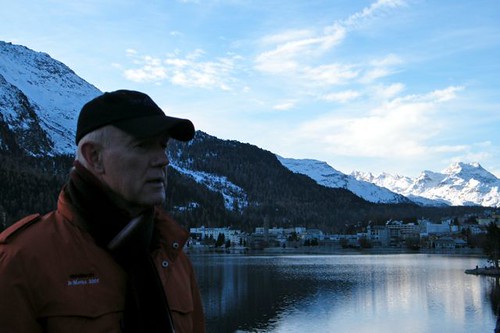 St Moritz is divided into two communities, St Moritz – Bad (on the West side of the lake) and St Moritz – Dorf, on the North side. The city is known for hosting the Winter Olympics in 1928 and 1948 however it was also the birthplace of the bobsleigh, competitive winter sports as a whole, the skeleton (tobogganing), and winter tourism. The alpine ski starting point atop Piz Nair has a 100 per cent vertical drop, which is the longest, steepest start in the world and various other venues are either the longest, fastest, or oldest of their kind in the world. 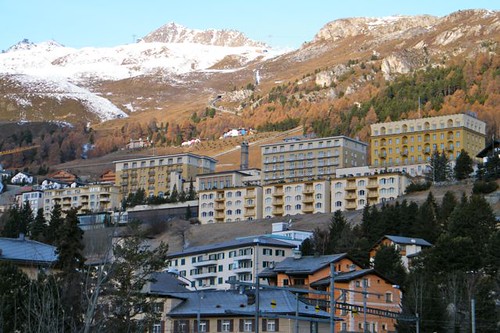 Aside from Winter sports, St Moritz is also a summertime destination with a trail network that spans over 180km. Athletes such as Lance Armstrong come here for altitude training, while windsurfing and sailing on the lake are also big attractions. John also noted that they have three seasons in St Moritz; Summer, winter, and building as we noticed cranes and construction work dotting the landscape. 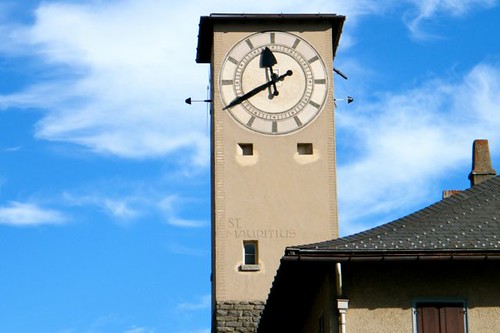 Due to its mineral springs, the area was originally a place people traveled to for cures, spas and even pilgrimages as in 1519, Pope Leo X gave total absolution to all who made the journey to St. Mauritius Church. For centuries it was a destination but there was no real infrastructure until 1815 when the first formal spa facilities were constructed.

Soon after hotels followed, including the five-star Carlton (that was originally built as a holiday home for Tsar Nicholas II of Russia), Palace Badrutt’s, and the Cresta Palace. 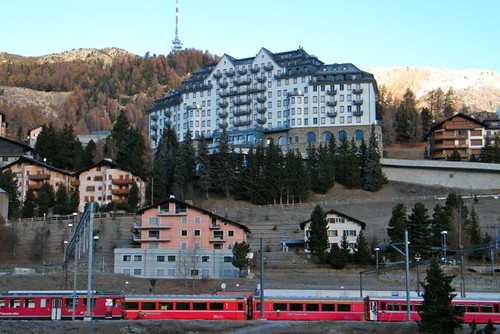 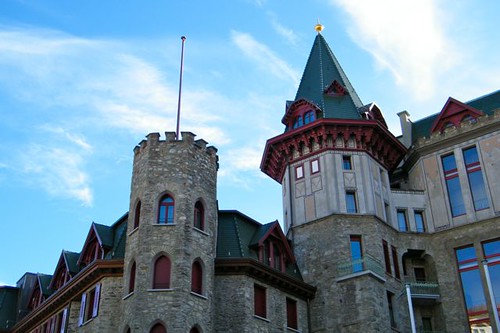 Heading up to the city from the lake-side promenade, we crossed through the central parking garage. To reduce the amount of cars on the narrow roads, this massive multi-level lot is carved inside the face of the mountain and uses a series of escalators (including the country’s longest) to get pedestrians up to the village level. Along the way, the Design Gallery of St Moritz outfits the passage walls with a photography exhibit. 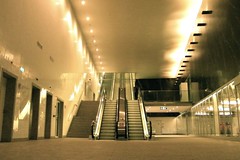 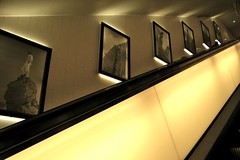 The city was deserted when we started out and John explained that during the winter, locals go about 4 straight months of working 7 days a week so in the off season they take plenty of much-deserved time for themselves. However bare the streets were in terms of actual people, there was no shortage of high-end names; from D & G to Cartier, Versace, Prada, and Bulgari. At 10am on a Saturday morning the locals you do pass by are completely dressed to the nines in suits and sleek leather apparel, even when out walking their dogs. 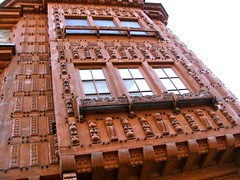 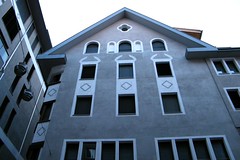 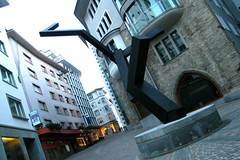 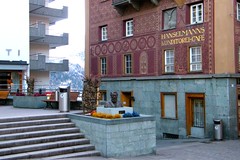 Winding up the stone passageways I couldn’t stop taking photos of the buildings, which all had such beautiful architecture and detailing. John said that the etching we saw on the sides of the structures was called “scrafitti.” This is the process of etching coloured patterns into the plaster while it sets over a period of several weeks. 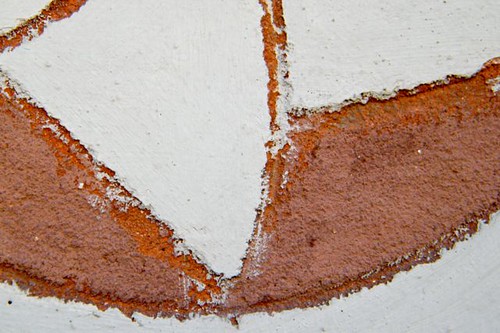 We passed by the oldest farmhouse in town, where we were told that livestock would be lead through the bottom door and kept on the lowest level of the house during winter months. The heat from the animals’ bodies would then rise up through the floorboards and keep the families nice and toasty. Now, the building is home to a restaurant and a pizzeria on the very top level. The ornately-carved wooden doors were a sign of status and wealth. 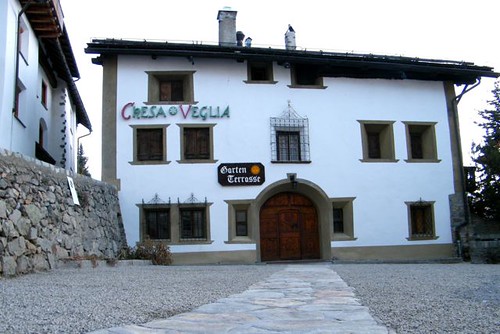 Continuing our inclined stroll through the twisting streets I noticed the abundance of colour — bright blue, yellow, and red alpine flowers were spotted throughout courtyards while the scraffiti-surfaced buildings boasted deep brown, and orange hues. 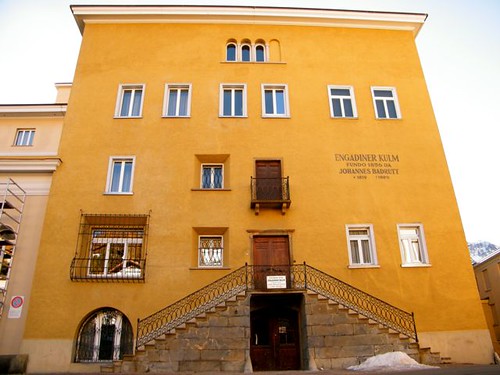 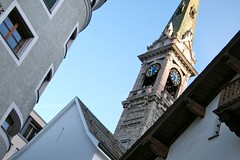 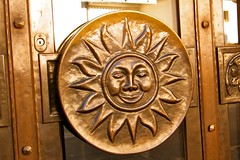 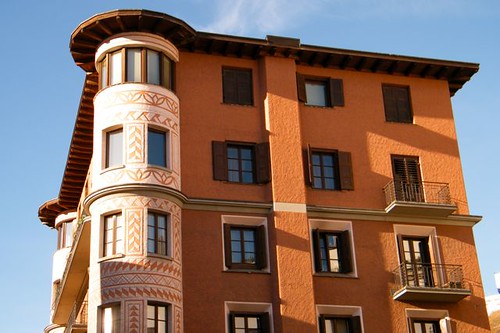 Making our way all the way up to the original site of St. Mauritius Church, which has its own leaning tower, which is still structurally sound. From there we learned about the history of the bobsleigh and the Cresta Run before heading down to the Olympia Bob Run (which will be covered in another post). 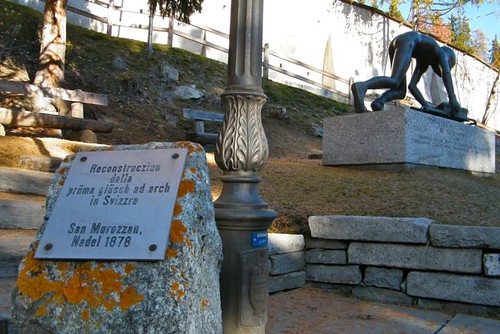 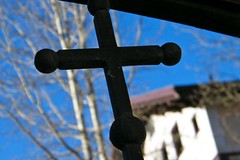 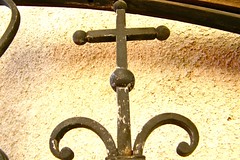 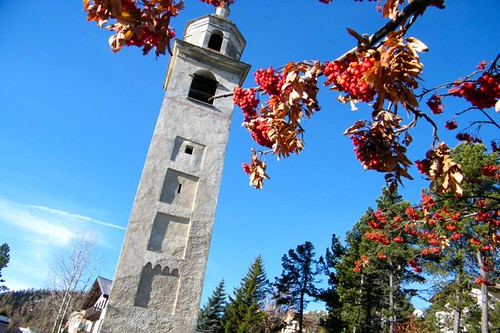 Walking back through town we passed the outdoor curling rink used during the St Moritz Olympics, and stopped off at Hanselmann for some coffee and treats. 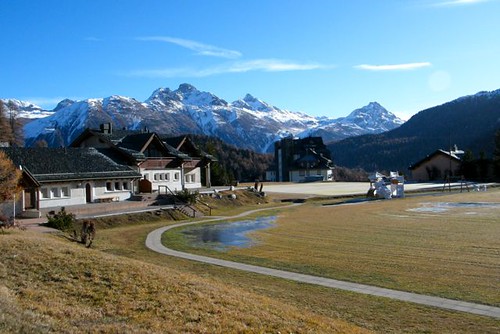 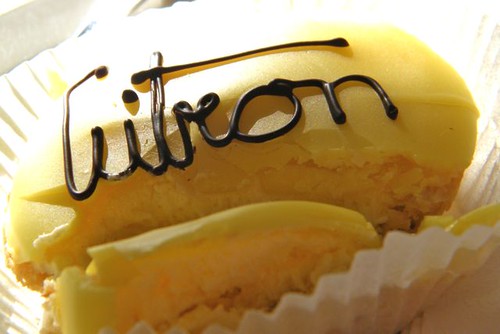 Sitting in the confectionery where Audrey Hepburn would have her afternoon tea, the legend that is St Moritz had yet to soak in. The profound history of ancient ruins and sporting innovation mixed with modern glitz and glam all melts together in this wondrous place. Snuggled in by mountains on all sides with a lake that reflects its naturally glassy scenery, I think my breath was simply taken away for the entire duration of our guided walk. 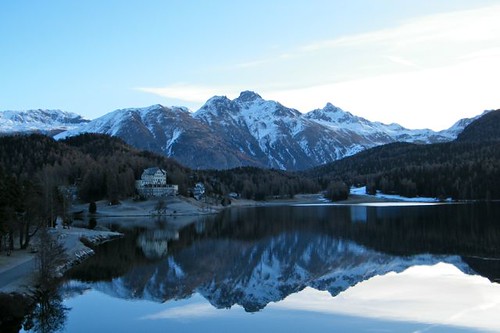 Although this side of St Moritz may not be the most affordable for most (compared to our quaint hotel across the lake) it is still a destination to be explored for countless reasons. 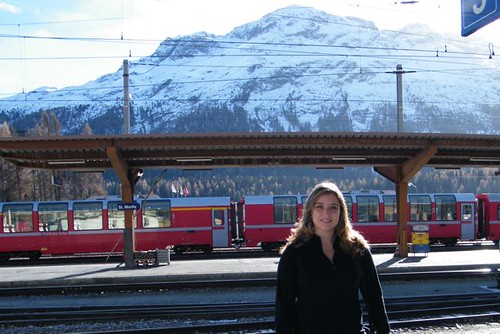 Hopefully my hike-loving husband will want to return with me someday in the summertime so we can get a bird’s eye view of one of the most amazing places on earth. 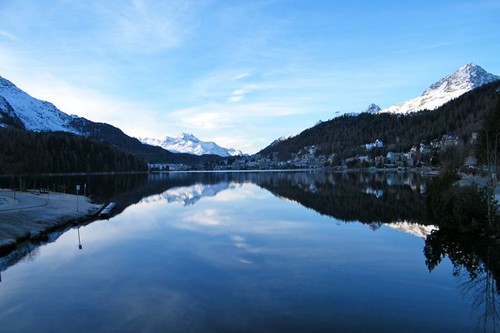 You can get your own taste of St Moritz at the House of Switzerland Canada during the Vancouver 2010 Olympic Games. Located at Bridges on Granville Island (and the Mountain Club in Whistler), the House will have a St Moritz theme and will be entirely open to the public throughout the Games.

Also on Miss604.com
« Switzerland: On the Train, Up a Mountain
Switzerland: Farewell Zurich »