Jets Overhead will be playing the Live Sessions at the Chan Centre on Thursday before heading out on tour. I had the chance to speak with Antonia Freybe-Smith this week about the tour, the band and their album No Nations.

Antonia met her fellow bandmates while living in Victoria where they formed Jets Overhead in 2003. “”It’s a great comunity here,” said Antonia. “Sometimes we get asked ‘do you think you’re at a disadvantage not being in Toronto or Montreal?’ and I feel like it’s the complete opposite.” Antonia said that the music community in Victoria is at a great size — you know everyone else, there’s great venues to choose from, and there’s diversity in the music. 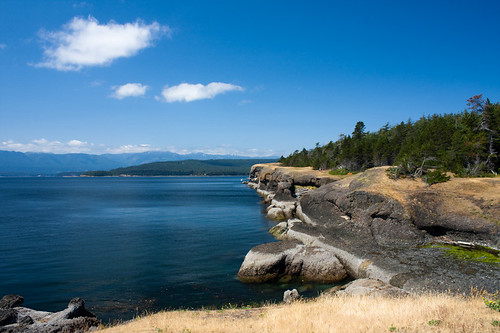 Antonia spent time there growing up as did drummer, Luke Renshaw, although it was Adam’s idea to take the production on the road. “We liked the idea but it was kind of overwhelming at first — and seemed like a logistical nightmare,” noted Antonia. “But Adam rallied us all and we did it. Thank God too because it was just so awesome.” The group, who co-produced the album with Osborne, held up in Joe King Hall on the Island where they were away from city noise and cell phone reception. “You can hear the vibe on the record — it’s just this neat laid back kind of West-Coasty kind of vibe and it really influenced the way the record ended up sounding, in a good way.”

No Nations was released this past summer and is available in Canada, and on iTunes in the USA. The title track is also available for download from the band’s website under a Creative Commons License. The license, similar to the one you can get for your blog or Flickr photos, permits you to download the song, share and remix it. This isn’t the group’s first foray into the world of online distribution. They actually beat Radiohead to the punch in terms of offering up an entire album online for a “pay what you want” price tag back in 2006 with Bridges.

“It’s a really interesting time in the music industry in terms of what music is worth to people and how they go about getting it,” said Antonia. “A lot of power is going back into the hands of the listener and the musician.” She said their album Bridges which was available for the “pay what you want” PayPal download was also purchased in iTunes. She said that people will find a way to get your music regardless of how you distribute is. “If they really want it they’re going to get it so we might as well put up something of good quality.”

Antonia suggested that any listener (no matter how they’re listening to the album) can become a fan. “If we can make a fan and eventually have them come to a show and buy a tshirt, that’s another way it pays off.” Using online distribution is ideal when you have the goal of getting your music out to the widest audience possible.

She commented on how her sentiments towards paying for music have changed, now that she knows how the recording process works and has experienced all the details and fine tuning that go into making an album as reality. “It feels good to buy music — it just makes it worth something.”

The band has also released all of their official music videos on Vimeo, a video-sharing service known for its high-quality content. Antonia commented on the fact that many band videos are pulled from services like YouTube although that defeats the purpose of reaching that wider audience. “People are paranoid and they try to pull closer, grip tighter, and you just have to kind of let it go and reevaluate.”

You can catch Jets Overhead this November at the Commodore in Vancouver as they head out on tour supporting Lights and across Canada the rest of the month. They’ll first make a stop in California for the 23rd annual Bridge School Benefit, with which they are involved through Neil Young who operates their American label.

Their latest album No Nations is available on iTunes in Canada, the USA, and internationally as well.

If you would like to see them this Thursday at for the Live Sessions recording (for the CBC) you can enter to win two tickets by leaving a comment over on this post.