I heard about this in the news years ago but every time I walk into the Starbucks on Robson and Bidwell I am reminded of the heroic act and sacrifice made by Anthony McNaughton. 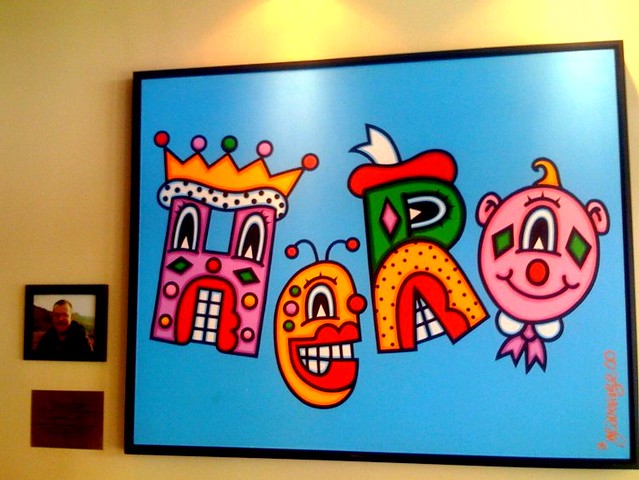 In January of 2000, Tony McNaughton was the manager of the Starbucks when a man (who was the disgruntled ex-husband of an employee) entered the coffee shop wielding a butcher knife to attack his ex-wife.

McNaughton fended off the man and told his employee to run, while he then got stabbed. The woman involved crossed the street to call for help and McNaughton was later taken to St Paul’s Hospital for his wounds, and passed away. The perpetrator was charged with second degree murder. The story made headlines across the globe, including a write up on the BBC’s website since McNaughton was a Northern Irish immigrant.

His selfless act, basically saving the life of his employee who would have been dead in the hands of this man otherwise, is commemorated by way of a painting and plaque at the Starbucks. I also discovered a Tony McNaughton Memorial Fund founded at the Canadian Women’s Foundation, by the Starbucks Coffee Company. The Fund is used for violence prevention projects in Western Canada.

The way I see it, walking into the local Starbucks, seeing the painting, and being reminded of McNaughton’s sacrifice is far more powerful than anything I could ever read on the back of a coffee cup.

October 2014: This West End location of Starbucks is closing. The Hero painting in Tony’s honour will be moved to the Starbucks on the corner of Robson and Denman.

The Robson and Bidwell Starbucks felt more like a neighbourhood coffee shop than any other I’ve know in Vancouver, and this was because of its staff. I hope many of them stick around (there is the Starbucks at Jervis and Robson as well as the Denman and Robson location) since they were truly what made the neighbourhood great. Tony’s spirit lives on.

Share273
Tweet
Share
Pin
Email
Reddit
WhatsApp
273 Shares
Current Contests on Miss604
*All contests are open to residents of Canada only, unless otherwise stated. Contest timelines are published on each individual post along with entry methods. Some contests may only be open to those 19 years of age and older. Winners are announced on the contest blog posts. Contest policy »