A few weeks ago I was trying to come up with a history post one day and I put the call out to my contacts on Twitter, asking what they would want to know about local history. As a result I received several great tips and suggestions, which I have been researching and publishing bit by bit.

The following is the latest installment of my History Tidbits series based on a response by @6oz, asking about the Guinness family’s influence on the region. However, this particular segment was written, researched, and contributed to Miss604.com by Anita Webster of Anita Webster Communications. She is a Vancouver public relations gal, aspiring blogger, and really great for putting this together:

Recent news about bridges, tunnels and tolls reminded me of a toll booth from our city’ past. I am a third-generation Vancouverite – yes, there are a few of us around – and as I grew up on the North Shore I remember my family paying a toll to cross the Lions Gate Bridge. My parents say the toll was something that gave them pause before they bought their land in West Van. 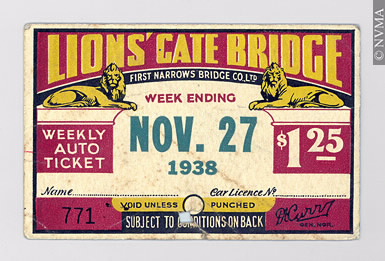 Also known as the First Narrows Bridge, the Lions Gate Bridge was built by the Guinness family – the Irish beer barons – to provide access to the north shore of the city. The Guinnesses had purchased 4,000 acres in what is now West Vancouver for $18.75 an acre – and were busy developing it.

Bridge construction started in 1937 and was completed the following year for just under $6 million. The bridge originally had two lanes.

To recover their construction costs the Guinness family had toll booths installed at the north end of the bridge. When the tolls were instituted, a weekly auto ticket cost $1.25, pedestrians paid 7.5 cents per crossing and cars were 25 cents (plus 5 cents per extra passenger).

As West Vancouver grew, demand on the span increased and in 1952 the two lanes were divided into three. Hair-raisingly, the centre lane was controlled by a blinking amber light and was for passing – in either direction.

1952 was also the year toll revenues had finally covered cost of construction. The Guinness family sold the bridge to the provincial government in 1955 though the tolls continued until 1963. I guess we paid for the bridge twice. 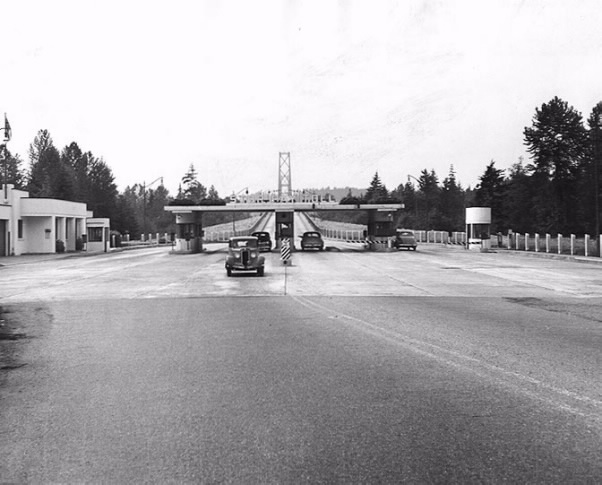 My parents, delighted at the news the tolls were gone, saved the money they had been spending on toll tickets and bought a Danish chair still in their house and still known as the Lions Gate Bridge chair.

The Guinness Family’s last involvement with the bridge was when they had lights installed along its graceful lines as a gift the our city for Expo 86.

More information can be found at the West Vancouver Memorial Library or the North Vancouver Museum and Archives.

The History Tidbits series will continue at a later date with:

Share30
Tweet
Share
Pin16
Email
Reddit
WhatsApp
46 Shares
Current Contests on Miss604
*All contests are open to residents of Canada only, unless otherwise stated. Contest timelines are published on each individual post along with entry methods. Some contests may only be open to those 19 years of age and older. Winners are announced on the contest blog posts. Contest policy »