About a hundred and fifty years ago cows were being raised at the north end of Burrard Street in Vancouver’s downtown. It was a farm bought by three Englishmen, who came to be known as “The Three Greenhorns”, that purchased most of what we know today as the West End, spending $1.01 for each of the 550 acres.

October 1862 – A Yorkshire potter named John Morton saw a chunk of Burrard Inlet coal on display in a New Westminster shop window and wondered if near that coal there might be fine clay suitable for pottery. There was clay, but of a quality suitable only for bricks.

Morton and two associates (his cousin Sam Brighouse and William Hailstone) bought the land hoping to become brickmakers however they spent so much on this venture that one newspaper dubbed them “three greenhorn Englishmen” and the nickname has stuck through history. [VancouverHistory]

Until today I was unaware that there was a sculpture in place, honouring the Greenhorns. At the entrance to English Bay, just past where Denman meets Davie Street, there is the George Cunningham Memorial Sundial. 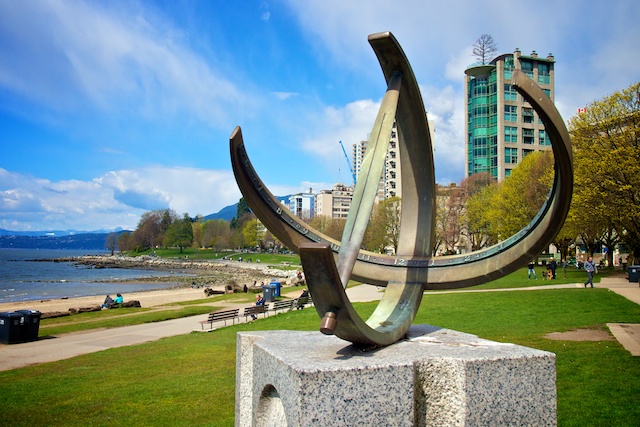 The George Cunningham Memorial Sun Dial was created by sculptor Gerhard Class. The bronze and granite memorial, near the foot of Denman Street at English Bay, was commissioned by Cunningham Drug Stores. It commemorates the “Three Greenhorns” who settled in the West End around 1867, as well as the first drugstore built in the area in 1911. [VancouverHistory] 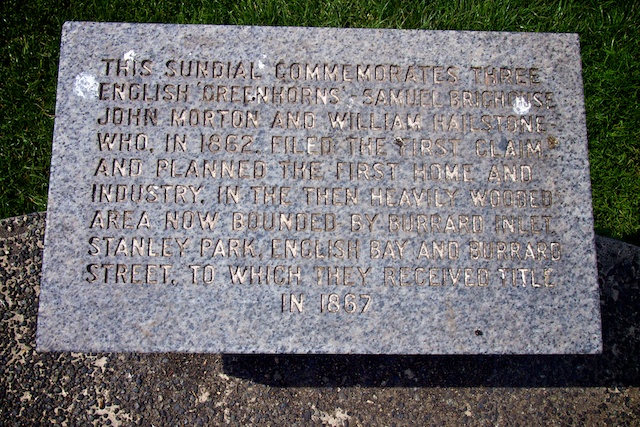 I took a stroll down there this morning (in honor of the CBC’s On The Coast event today at 3:00pm) to snap a few photos of this piece that commemorates some of the first settlers and businesses in the West End.

Also on Miss604.com
« Flip N Asian Show at Lafflines
CBC's On the Coast Liveblog from O'Douls »