I was first introduced to Panty by Post by Rebecca Coleman after the Making a Scene Conference in November and soon after they signed on as sponsors for the Best of 604 Awards. The company came through and not only provided a prize for one of the category winners, but also a raffle prize, and supplied me with a sample product.

Since that time, Panty by Post has launched their website (which is soon to be updated, including a blog) and I’ve had them sign on Keira-Anne as an ambassador as well. I must admit, it’s pretty fun to see our names listed on their media page right under Kim Cattrall. 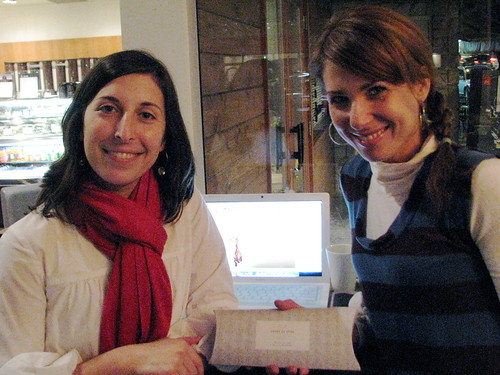 In an effort to learn more about the company and inform my readers, I sat down for a chat the founders of this local company, Lori Sholzberg and Natalie Grunberg.

“She wrote to me from France to tell me about this ‘panty of the month’ club, and I thought it was just a fabulous idea,” noted Lori who met Natalie in University and stayed in touch over the years. Natalie was living in France when she got the idea for Panty by Post, inspired by the well-dressed and charming appearance of the locals, no matter their demographic.

Both women started to brainstorm ideas in the summer of 2008 and since then they’ve launched a full e-commerce site, which neither expected to be doing however given their entrepreneurial spirit and work ethic, it isn’t surprising that they’re already showing signs of success.

How it works: Select a subscription for yourself or as a gift for someone else on the website (choose styles and frequency, once, 6 months or a year), then you may enter a personalized message, make your payment, and your panty is in the mail.

The panties are from Blush, a Canadian company from Montreal, which was a perfect fit for the duo. “We hope to design our own eventually, but for now they’re working quite well for us. They have the cute, lacey, fun, French, and affordable styles.” Both emphasized that this is a service that is meant to be affordable as the true value is in the novelty of receiving something pretty in your mailbox, just for you.

I personally love getting actual mail, and to have that contain a special present for me every few weeks is a fun idea. In Keira-Anne’s post there was a comment about the price of the panties, which doesn’t concern me much since I could go pick flowers from the garden for free but receiving a bouquet of flowers that sent to me by someone with a special message, is pretty priceless… 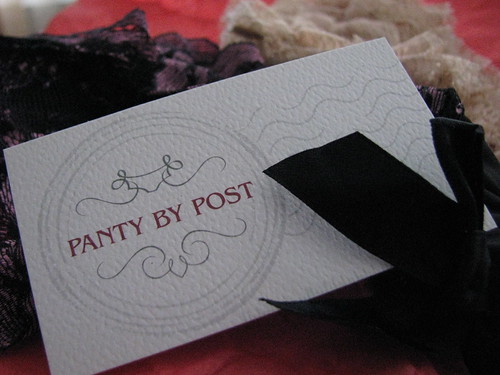 Lori also spoke to their level of customization, “You can pick the package that you prefer but you can also suggest colours and specific styles which we can add.” A key element is the surprise but they also welcome feedback and requests, and hope to soon expand their line.

“Originally we had an idea what our market would be like but the more and more we started bouncing ideas off to old and younger ladies it became evident that everyone was interested,” noted Natalie, “we came up with the concept that it’s not your mother’s underwear but we would want your mother to wear this underwear,” speaking to the universal nature of the fancy product.

“So far the people that have bought the packages have been men buying them as gifts for their ladies, women buying them for themselves, and those buying them as gifts. We now have one client who is getting married and wants to give subscriptions to the those at her shower.” The bridal concept is currently in the works for Panty by Post, as well as an expansion of their brand for various other markets. “We’re born entrepreneurs, it’s just something that you’ve got.”

They’re also interested in giving back, helping women feel great about themselves and also donating their time to help out causes such as the upcoming Evening with Diana Krall.

Both are very passionate about what they are doing and I’m convinced that they would not be doing this if they didn’t truly believe they could run a successful business that offers a service which not only delivers goods, but is fun, makes people feel special, and offers them a real treat.

Disclosure: I was not paid to write this post or do the interview, however I did receive my own Panty by Post