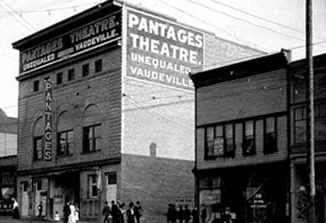 Hastings Street is one of the most historic strips of roadway in Vancouver and it it currently home to a large piece of Vancouver’s theatrical history that was supposed to undergo a renovation and revival for 2010.

“The Pantages Theatre, during its heyday it hosted stars like Charlie Chaplin, Jack Dempsey and Babe Ruth. Also, a nephew of the original Mr Pantages, Peter Pantages, took over the theatre in the 1920s and also founded Vancouver’s Polar Bear Club. [Miss604]”

At the turn of the 20th century Vancouver was just starting to boom. Building on up the backs of the industry workers, loggers, and Klondike gold rushers there needed to be some form of entertainment and Mr. Pantages was just the man to provide it. The original Pantages Theatre opened in 1908 and went through many iterations, which once involved being called The State in 1919 featuring burlesque acts. Through all of its phases The Pantages was indeed Vancouver’s vaudeville beacon and another of the same name was opened down the street (on Hastings) in 1917. [Miss604]

Unfortunately the refurbishing of the Pantages, planned since 2005, will no longer be taking place.

There are for sale signs up at one of western Canada’s oldest theatres, the Pantages near Hastings and Main in downtown Vancouver. The 100-year-old venue could soon be sold and demolished, meaning a significant part of Vancouver’s history would be lost. [CTVbc]

Local publicist Rebecca Coleman adds her personal and professional experience to the story.

This theatre is magic. I don’t know any other way of describing it. Being in there was amazing. Even though the theatre is derelict and falling down, the energy is incredible. The history of that building, and its potential impact its resident companies, specifically, and the Vancouver arts community in general, is immense.

Coleman also gives more background about the plans that were proposed for the Pantages and adjacent buildings.

In 2005, developer Marc Williams bought the property and the four adjoining ones to the west. The plan was to gut and restore the 650-seat theatre (which has incredible acoustics), build a new lobby, a new entrance, an art gallery, and 130+ units of social housing.

On April 16, 2008, after many, many tours, meetings, and getting people on board, we had a press conference announcing Williams’ $26 million development plan. It was attended by media, members of the arts community, and the Downtown East Side, and it was a huge success. [The Art of the Business]

I was personally looking forward to Pauline the opera about Pauline Johnson’s life that Margaret Atwood was even involved with. This, on top of my appreciation for Vancouver’s history and support of reviving the Downtown Eastside community, makes the news of the property sale all that more disappointing.

If you would like to learn more check out the Pantages website or Facebook group and consider signing the petition to get the attention of Vancouver City Council.

According to Rebecca Coleman, “Vancouver needs the Pantages. The Arts community desperately needs more performance space. The Downtown East Side would benefit both from the social housing, and access to and involvement with cultural events in their own neighborhood.”

Update From the Heritage Vancouver Society: Feb 23, 2011: There is no viable proposal to save the Pantages. It continues to deteriorate beyond the point of repair. Its imminent interior demolition is expected, but as of this update, no demolition permit has been issued by the City.

Update From the Heritage Vancouver Society: April 6, 2011: It’s official – a demolition permit has now been issued by the City for both the Pantages Theatre and adjacent sites.

Share3
Tweet
Share1
Pin
Email
Reddit
WhatsApp
4 Shares
Current Contests on Miss604
*All contests are open to residents of Canada only, unless otherwise stated. Contest timelines are published on each individual post along with entry methods. Some contests may only be open to those 19 years of age and older. Winners are announced on the contest blog posts. Contest policy »

Also on Miss604.com
« The Next Great Prime Minister of Canada
Slap Shot 3 Takes the Ice in Vancouver »