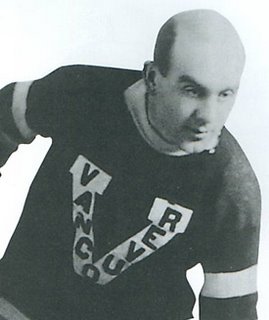 I was recently inspired to write another post of this nature based on how I was able to enlighten folks to the fact that there was much more to Joe Fortes than an oyster bar.

Whenever I hear the ad for Cyclone Taylor Sports on morning radio it gets stuck in my head for the better part of the day. Cyclone Taylor’s is one of those local stores that is rooted deep in Vancouver history and has managed to avoid being bought up by the giga-multi-plex sports retail outlets over the years. However, there’s much more to Cyclone Taylor than mouth guards, elbow pads and hockey sticks as Fred “Cyclone” Taylor was on the last Vancouver hockey team that raised the Stanley Cup over their heads.

Fred “Cyclone” Taylor Sr. was one of professional hockey’s first superstars. While Fred was playing for the Ottawa Senators in 1907, Canada’s Governor General was so impressed with his incredible Speed that he coined the name of Cyclone, and it stayed with him the rest of his life. Cyclone Taylor played in 4 Stanley Cup series during his 18 years of professional hockey. He won the cup in 1909 with Ottawa and in 1915 with the Vancouver Millionaires. The other two series Cyclone played in with the Vancouver Millionaires they lost to Toronto in 1918 and to Ottawa in 1921. Cyclone passed away in 1979 at the age of 94. [CycloneTaylor]

Taylor’s speed, skating abilities and scoring skillfulness lead him to 198 goals in 180 games and as noted on the Hockey Legends blog, “After playing eighteen years of hockey Taylor claims he never once got a scar or lost a tooth. The two biggest factors that contributed to that was his skating ability and that he wasn’t a rough or dirty player.”

As for the stores, they were established by Cyclone’s son Fred in 1957 and are still going strong as Western Canada’s largest independent retailer.