In 1986 he was named Vancouver’s “Citizen of the Century” and he was pretty much just a regular guy who happened to spend most of his time saving lives.

You’ve probably seen the restaurant that’s famous for its seafood and that yellow cab out front, and maybe you’ve been to the library named in his honour, but do most Vancouverites these days know much about the man Joe Fortes himself? Joe Fortes was born in Barbados in 1865 and by way of Liverpool, England he ended up in Vancouver after surviving a shipwreck. He held many jobs – as a bartender, porter, shoeshiner, etc. – but fell in love with English Bay and soon became Vancouver’s first self-appointed, un-paid lifeguard, living in a tent on the beach. Shortly thereafter he was given official lifeguard status and overlooked what soon became known as “Joe’s beach.” He would go on to teach hundreds of children to swim, to save over 100 lives and to become a legend and inspiration for the city. … scarcely a tyke who was raised in Vancouver in the 1890’s or 1900’s but learned to swim with Joe’s ham-like fist gripping the back of his or her cotton bathing suit and that deep, mellow voice ordering, “Kick yo’feet, chile – kick yo’ feet.”…Mothers confidently shooed their children away to the bay for the long summer days with the simple command, ..’and don’t go away from where Joe is..’ ” [History of the West End]

In 1922 when he passed away his funeral at the Holy Rosary Cathedral was the most-attended to date in the city. 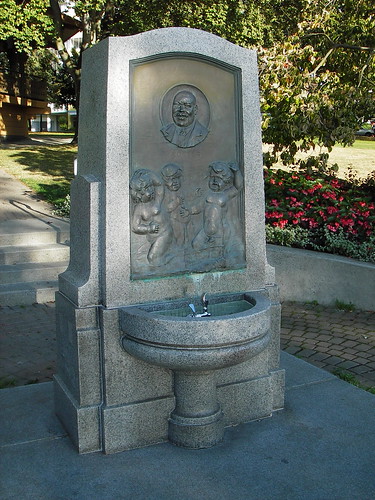 The people in Vancouver held Joe in such high esteem that ever since 1926, when a memorial fountain was placed for him near English Bay, we’ve been naming things in his honour. He would later have a branch of the Vancouver Public Library (on Denman) named after him in 1976 and a famed oyster bar restaurant on Thurlow street would open in 1985, bearing his name one hundred years after he came to the city. In 2003 the National Film Board of Canada even produced an award-winning short film called, “Joe”.

The fountain depicted in the photo above resides in the West End’s Alexandra park. It’s the perfect height for youngster and on it is inscribed, “Little Children Loved Him.” Next time you pass by the fountain, the restaurant or the library, now you’ll know about this great man who changed the lives of many in Vancouver – from all walks of life, young and old.

Joe, Jill Haras & Jill Haras, provided by the National Film Board of Canada

Facts from this post were gathered with help from my favourite Vancouver history website, VancouverHistory.ca more can also be read on the Black Historical and Cultural Society’s website.

Share63
Tweet16
Share6
Pin
Email
Reddit
WhatsApp
85 Shares
Current Contests on Miss604
*All contests are open to residents of Canada only, unless otherwise stated. Contest timelines are published on each individual post along with entry methods. Some contests may only be open to those 19 years of age and older. Winners are announced on the contest blog posts. Contest policy »