I flew out to Toronto for a trivia quiz along with about a hundred other contestants from various careers and walks of life to participate in Test the Nation on the CBC. Those watching at home on Sunday January 20th were be able to play along with the television show, or even online. There were several teams (cab drivers, bloggers, backpackers, celebrity impersonators, chefs, and flight attendants) and we were all put to the test with some 21st century trivia. Here’s how the night unfolded:

SWEEP! SWEEP! SWEEP! That was the chant when it was announced that our celebrity, Samantha Bee and teammate Rick Spence were both crowned top scorers at the end of the night. We were still awaiting the final team results but the bloggers were feeling pretty good at that point. Throughout the evening our team chanted (Bee! Bee! Bee!), hooted and hollered, and talked a fair deal of smack. We were completely enamored with Samantha – who talked to us often, made motions our way and really interacted with “her people – the indoor kids”. Even when other teams would let a rousing “nerd” chant slip in our direction our solidarity was never shaken and we stood strong. It was also rather amusing that a teleprompter was facing our way (and our way only) before the show started. At one point someone rebooted the system and when the Windows 98 start up screen appeared we all had a nice chuckle.

So… was it a sweep? Did Samantha and Rick represent for the Bloggers while some other team won? Of course not, we took it all! 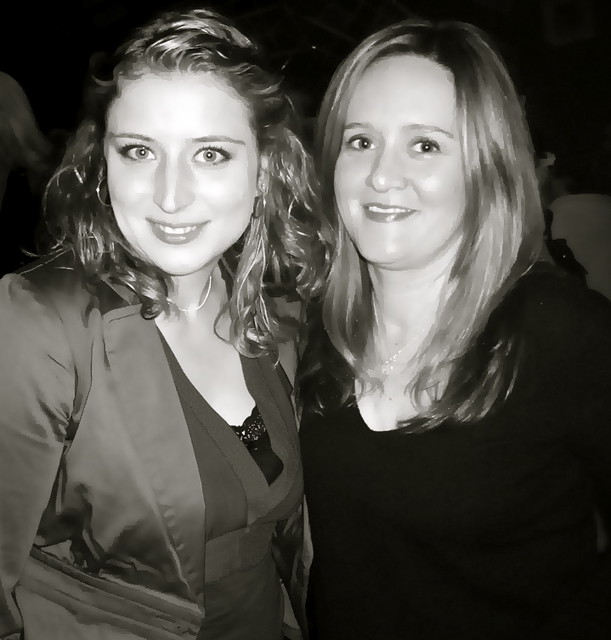 With an average of 50 correct answers out of 60, the Bloggers were victorious. It’s been a long day. A long day of cold winds and waiting around watching celebrity impersonators strut their stuff and have diva moments. There are so many witty, snarky and hilarious catch phrases that made me laugh today but I can’t bring my exhausted mind to remember them right now.

I have to say it was a pleasure to meet everyone – from the House impersonator dude, the Surreal Gourmet, Samantha Bee, Mr Geography of the cabbie team, and even “Paul Stanley” who said he practiced wearing his platform shoes for hours by jogging in them. The Flight Crew was impressive, the Borat impersonator was in character all night and freakin hilarious and the backpackers were probably our biggest competition.

Congrats to Rick Spence, and be on the lookout for photos of each person on the blogger team, taken by Rannie. Big thanks to Molly @ the CBC for getting me out here, being very encouraging, and supporting ‘Team Blogger’. Super tons of thanks to my family and friends (who all held viewing parties) and to all those Vancouver bloggers who supported us, watched the show, and played along.

We won’t get to know our individual scores til tomorrow but since the ‘test audiences’ scored an average of 40/60 and our team had 50/60 as an average, I’d say we did pretty darn well. Good times guys (hence the stupid grin on my face all night) and by the way… for the record… BLOGGERS RULE!

Update: John Biehler made some clips and put them on YouTube – video 3, video 2, and video 1 – check out “some of the face of non-mainstream media”.

Update: In case some trackbacks don’t work, here are a few more bloggers (and viewers) who have covered our victory last night – that will surely lead to world domination:

Update: More detailed results are in.