The Rio Theatre is serving up a mix of romantic hits and fan favourites as this month’s Friday Late Night Movies. These 19+ screenings can be complimented with a beverage from the theatre’s full service bar as you enjoy a night out with friends. Tickets are available online in advance or at the door for $8 or $6 if you come in costume. 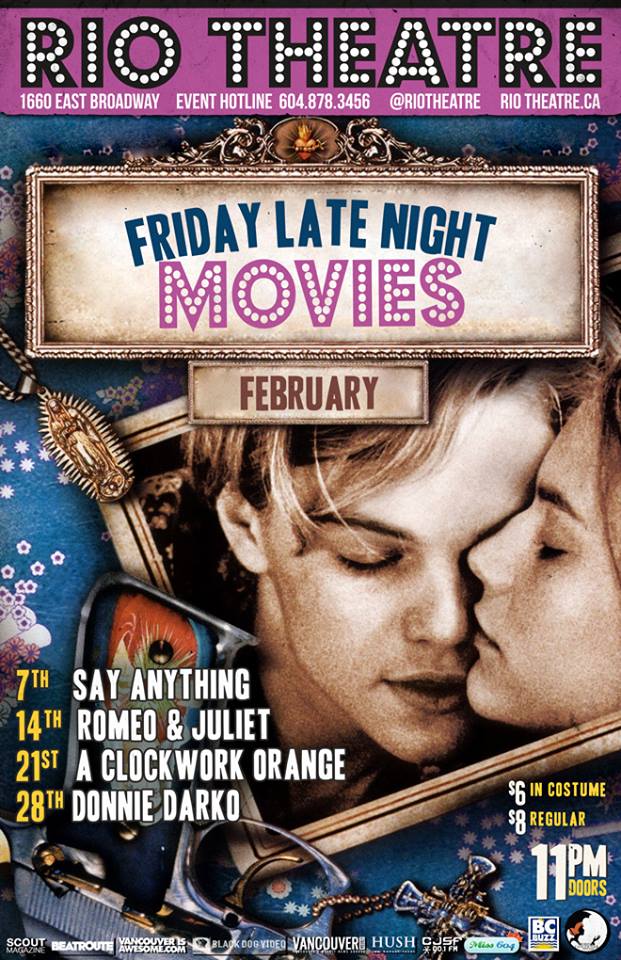 Say Anything…
(Cameron Crowe, 1989)
John Cusack’s iconic performance as the boombox-toting kickboxer Lloyd Dobler, who falls in love with “a brain trapped in the body of a game show hostess” (Ione Skye) in director Cameron Crowe’s Say Anything…, is, arguably, one of the best teen films to come out of the 1980s. It also happens to be one of our most requested films and the perfect movie to kick off February’s Friday Late Night Movie series. Also starring Lili Taylor, Jeremy Piven, John Mahoney, and Peter Gabriel’s ultra-romantic love song, In Your Eyes.

Romeo + Juliet (Baz Luhrmann, 1996)
Baz Luhrmann’s dizzyingly kinetic and thoroughly modern re-telling of William Shakespeare’s revered tragedy about two star-crossed young lovers (Leonardo DiCaprio, Claire Danes) is a must-see on the big screen and the perfect late night Valentine’s Day movie. The film is notable not just for its all-star cast (John Leguizamo, Paul Sorvino, Paul Rudd, Brian Dennehy, Harold Perrineau, Pete Postlethwaite, and many more) and its killer soundtrack (featuring songs by The Cardigans, Radiohead and Garbage) but because it manages to remain loyal to The Bard’s original, beautiful text. (Although… it doesn’t end well.)

A Clockwork Orange (Stanley Kubrick, 1971)
Stanley Kubrick’s ultra-violent, ultra-sarcastic, and ultra-visionary film set in a futuristic Britain follows the misadventures of charismatic delinquent Alex DeLarge (Malcolm McDowell), who volunteers for an experimental aversion therapy developed by the government in an effort to solve society’s crime problems while he is in prison… but not all goes according to plan. Featuring lots of Beethoven and a truly terrifying take on ocular surgery.

Miss604 is a media partner of the Rio’s Late Night Movie series.
Current Contests on Miss604
*All contests are open to residents of Canada only, unless otherwise stated. Contest timelines are published on each individual post along with entry methods. Some contests may only be open to those 19 years of age and older. Winners are announced on the contest blog posts. Contest policy »
Comments are closed on this post
Advertisement