Nov. 10/06: Interview Audio is now up on RadioZoom

Since John now describes me as the official “PR Babe” of the Podcast (on top of being the co-host) I thought it my duty to make something happen when he said he REALLY wanted to see the Sparta show. A couple emails later and we were sitting in the back room of Richard’s on Richards (again) interviewing Jim Ward of Sparta [official site][myspace]

The doors were at 9:00 but we were scheduled in at 8:00pm, leaving our house at 7:45pm we walked at a very fast pace to make it down to the club on time. I called the tour manager, Ed and he confirmed that everything was going smoothly, “Rebecca from Radiozoom.net – yep, we’ve got you with Jim at 8”.

Upon our arrival, Ed came out to greet us. Entering a nearly-empty Richards was a little trippy. There were cases, cables and equipment all over the dance floor as the two opening acts were getting ready for their sets. We were lead back into the same tiny room where we met with the guys from Aberdeen City [RadioZoom Interview]. It was Jim Ward, John, me and a microphone.

From there the podcast took off. We talked about everything from the new album, Threes, to politics, hometown memories and the health benefits of carrots. The interview will be available early this week on RadioZoom.net

After about an hour, we got a few pics with Jim, thanked him and walked out into the club on a high.

The opening band was local, The Februarys. They played with a lot of energy but their songs were a little too epic for me. It was entertaining at least and it was really great to see the Vancouver representation on stage. However, the bigger crowd of people were drawn to the bar at the back of the room, which was showing the Canucks/Avs game.

After a disappointing 3-2 defeat, our focus turned back to the stage. Up next – The Sound Team<, who lived up to their name entirely. 6 members crowded the stage, bass, guitar, drum kits, synthesizers, tambourines, and songs that lasted 8 minutes and you really didn’t notice (or mind).

At almost midnight, Sparta made their appearance and blew the crowd away. During the interview Jim said that they have a huge following in Canada, they love playing here. This was apparent from the reception the crowd gave as they took the stage – and it didn’t stop until the end of the night.

The band played tunes from all three albums, but as Jim said before the show, they wanted to make sure they got to most of the fans’ faves.

Tony Hajjar is a madman on the drums, keeping steady and full of energy. Jim’s vocals give you goosebumps, delivering emotional lyrics at a breakneck pace and range – then bringing it all to a grinding halt. Fans, who knew each and every note, sung along while raising arms in the air, either to clap or salute the display in front of them.

I am a ‘new’ fan of Sparta. I know a couple tunes from Wiretap Scars but am most familiar with the new album, Threes. Most reviews I have read say it’s a must-have in your CD rotation. Most blogs I have read seem to give off the impression that Sparta peaked in 2002. The band’s had a tumultuous past [wiki], I’ll give them that.

Some old school Sparta purists haven’t seemed too happy in the online chatter I’ve seen. But here I am, in love with Threes. This is exactly why Jim’s so excited about Threes and made sure to play a couple tracks at the show. 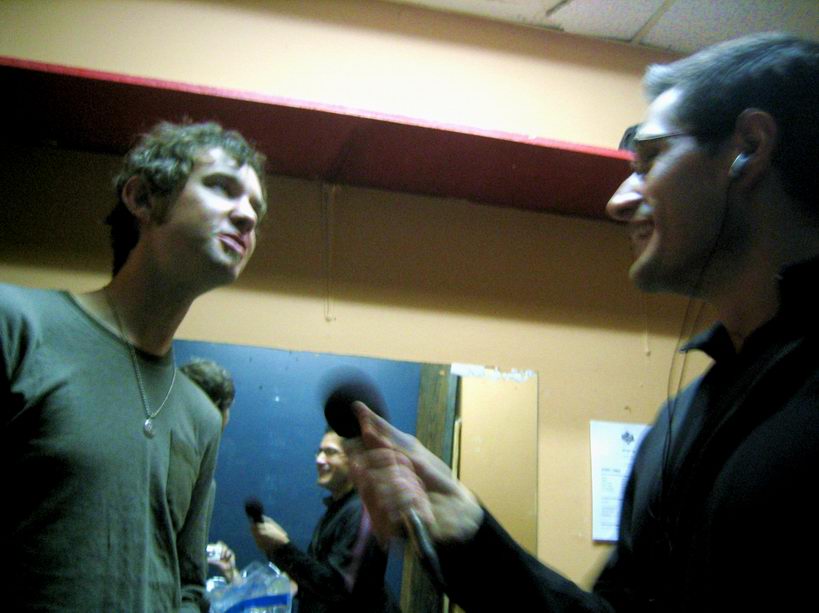 I always turn to John, who’s been crazy about the music all along. If there’s one person in this world to whom I would entrust every track I listen to for the rest of my life – it would be him. The verdict is that he’s been stoked about the new album, getting to know it more and more and enjoying what he’s heard. At the show he turned to me and said, “do you have the feeling that we just met with someone extremely important in the history of rock and roll?” I agreed.

The people in the room called for an encore, the guys came back and played two songs, a new one and an old favourite. People were dancing, clapping, and singing along at the top of their lungs.

No matter what roller coaster ride the band is on, they do seem to have a strong core following and I definitely see why. The new track ‘Taking Back Control‘ seems like it’s got real star power, being politically charged and an obvious crowd-pleaser, live.

I would strongly encourage past fans to give their albums another spin and to pick up Threes. I can be the most stubborn person sometimes, and I know it’s hard to watch a band change and grow – you just want them to be the way they were. But it’s a natural progression. It’s not change for the sake of change, I believe that there’s already been so much of that within Sparta that the only natural outcome, could be Threes.

Also on Miss604.com
« i guess since i'm half american now
swimming to work »