London Drugs is one of those stores where you just know you’ll find what you’re looking for. Whether it’s a snack, a movie, iPhone accessory, camera, cosmetics, box of tissues, shampoo, vitamins, toys, and gifts. Heading into a season of entertaining and home-cooking, they are currently profiling their small appliance collections. Here are just some of the products you’ll be able to find at London Drugs: If you’re curious to see what you can make with these items, check out London Drugs’ twelve recipes of Christmas cookbook. They’ll be featuring recipes on their blog in the coming weeks. To give you a head start with your holiday feast preparations, London Drugs has offered up one of their featured compact kitchen appliances to one Miss604 reader: 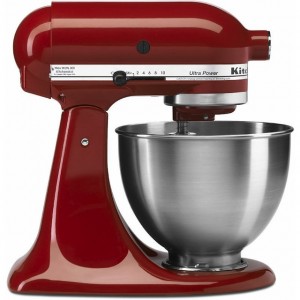 Prepare your ingredients in the KitchenAid Ultra Stand Mixer with its 10-speed control range with a capacity for kneading two loaves of bread.

The tilt-head design allows for clear access the stainless steel bowl. The stand mixer includes a flat beater, dough hook and wire whip. The KitchenAid Artisan series is available in 26 colours, chefs only need to order their custom colour in-store.

Here’s how you can enter to win this KitchenAid Ultra Stand Mixer (retail price $399.99) in red:

BC-based London Drugs has 78 stores in more than 35 major markets throughout British Columbia, Alberta, Saskatchewan and Manitoba. Follow along on Facebook and Twitter to hear the latest special offers.

Update The winner is @LeighStriegler!

Also on Miss604.com
« Covenant House Sleep Out A Success
Vancouver Photos of the Week »