We’re well into September now and that means Vancouver Giants hockey will be returning to the Pacific Coliseum for the 2013-2014 season. 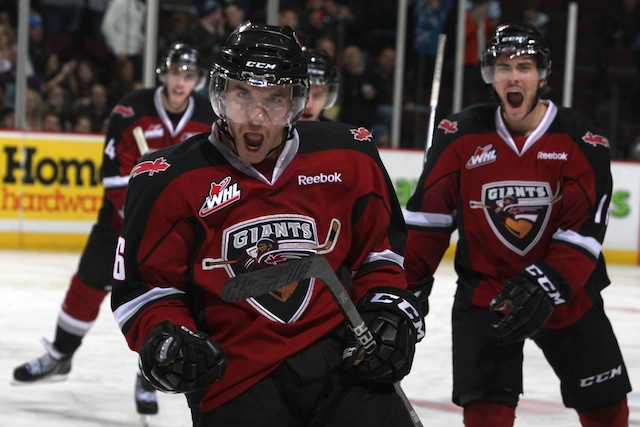 Photo courtesy of the Vancouver Giants.

This month you can take advantage of the “September Special” ticket deal and grab some Red Price Category seats for only $15*! There are also some great ticket deals throughout the season like the White Spot Family Pack that includes tickets, burger platters, Pirate Paks, parking, and a gas card. Here’s more of what’s in store for fans:

Attending a Vancouver Giants game is exciting, affordable, and a great way to support the local hockey community. With hard-fought battles on the ice, all of these extras for fans and for charities, you can truly get a sense of the team’s commitment to hockey with heart.

To get the season started, I have a 4-pack of tickets to give away to the home opener on Friday, September 20th vs Victoria Royals at 7:30pm. On top of that, I also have a $50 White Spot gift card to award the lucky winner. Here’s how you can enter the contest:

I will draw one winner at random from all entries at 12:00pm next Tuesday, September 17, 2013. Follow the Vancouver Giants on Facebook and Twitter for the latest team information, game updates, scores, special events and more.

Update The winner is @terrancecalhoun!