They sit above Vancouver and are the namesake for many things Vancouver-related, from bridges to movie production studios but not everyone would refer to these two majestic peaks, reigning over our region as “The Lions”. 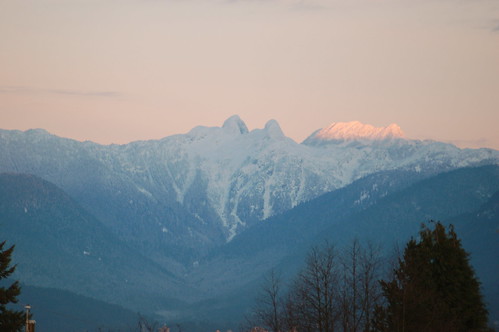 Legend has it that these are actually two sisters of a great nation that existed long before any of us were here. They are a part of a story and tradition that honors women and their peaceful nation, the following are excepts from the legend of “The Two Sisters”, written in 1911 by E. Pauline Johnson:

Perhaps the greatest of these traditions is the story of ‘The Two Sisters,’ for they are known to us as ‘The Chief’s Daughters,’ and to them we owe the Great Peace in which we live, and have lived for many countless moons. There is an ancient custom amongst the coast tribes that, when our daughters step from childhood into the great world of womanhood, the occasion must be made one of extreme rejoicing. The being who possesses the possibility of some day mothering a man-child, a warrior, a brave, receives much consideration in most nations; but to us, the Sunset tribes, she is honored above all people.

These two daughters were young, lovable, and oh! very beautiful. Their father, the great Tyee, prepared to make a feast such as the Coast had never seen. There were to be days and days of rejoicing, the people were to come for many leagues, were to bring gifts to the girls and to receive gifts of great value from the chief, and hospitality was to reign as long as pleasuring feet could dance, and enjoying lips could laugh, and mouths partake of the excellence of the chief’s fish, game, and ollallies.

The only shadow on the joy of it all was war, for the tribe of the great Tyee was at war with the Upper Coast Indians, those who lived north, near what is named by the Paleface as the port of Prince Rupert. Giant war-canoes slipped along the entire coast, war parties paddled up and down, war-songs broke the silences of the nights, hatred, vengeance, strife, horror festered everywhere like sores on the surface of the earth.

But seven suns before the great feast these two maidens came before him [the great Tyee], hand clasped in hand. “‘Oh! our father,’ they said, ‘may we speak?’ – “‘Speak, my daughters, my girls with the eyes of April, the hearts of June'” (early spring and early summer would be the more accurate Indian phrasing).

“‘Will you, for our sakes, invite the great northern hostile tribe–the tribe you war upon–to this, our feast?” they asked fearlessly. “To a peaceful feast, a feast in the honor of women?” he exclaimed incredulously. “So we would desire it,” they answered.

“And so shall it be,” he declared. “I can deny you nothing this day, and some time you may bear sons to bless this peace you have asked, and to bless their mother’s sire for granting it.”

And when the northern tribes got this invitation they flocked down the coast to this feast of a Great Peace. They brought their women and their children; they brought game and fish, gold and white stone beads, baskets and carven ladles, and wonderful woven blankets to lay at the feet of their now acknowledged ruler, the great Tyee.

The war-canoes were emptied of their deadly weapons and filled with the daily catch of salmon. The hostile war-songs ceased, and in their place were heard the soft shuffle of dancing feet, the singing voices of women, the play-games of the children of two powerful tribes which had been until now ancient enemies, for a great and lasting brotherhood was sealed between them–their war-songs were ended forever.

Then the Sagalie Tyee smiled on His Indian children: “I will make these young-eyed maidens immortal,” He said. In the cup of His hands He lifted the chief’s two daughters and set them forever in a high place, for they had borne two offspring–Peace and Brotherhood–each of which is now a great Tyee ruling this land.

And on the mountain crest the chief’s daughters can be seen wrapped in the suns, the snows, the stars of all seasons, for they have stood in this high place for thousands of years, and will stand for thousands of years to come, guarding the peace of the Pacific Coast and the quiet of the Capilano Canyon. 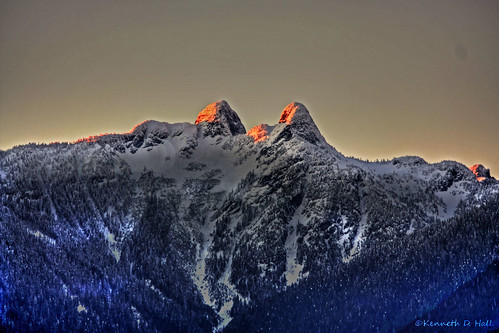 This is only a part of the story, for the entire legend I suggest reading the book, Legends of Vancouver by E. Pauline Johnson [amazon.ca]. The author passed away in 1913, but you can find her gravesite in Stanley Park that was dedicated in 1922 – in “memory of one whose life and writings were an uplift and a blessing to our nation”. She remains to this day a very important writer in Canadian history and tells tales of Vancouver and Stanley Park that are both uplifting, informative, and can cause you to shiver on even the warmest of days.